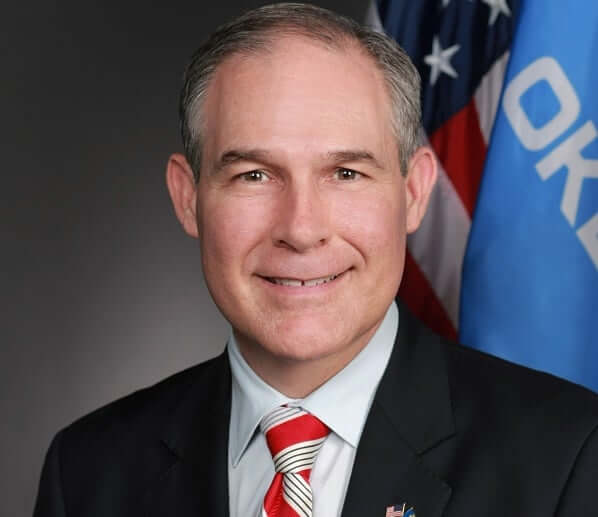 Three months after he vowed the agency would roll back vehicle emissions standards, Scott Pruitt is officially out as administrator of the U.S. Environmental Protection Agency (EPA).

On Thursday, President Donald Trump tweeted that he had accepted Pruitt’s resignation as EPA chief and lauded Pruitt’s “outstanding job” at the helm.

Rocked by reported scandals over his tenure, Pruitt – formerly attorney general of Oklahoma – was sworn in as 14th administrator of the EPA in February 2017. According to his former biography on the state of Oklahoma’s official website, Pruitt was a “leading advocate against the EPA’s activist agenda.” In 2015, he joined a multi-state lawsuit against the EPA in an ongoing effort to block the Obama administration’s Clean Power Plan (CPP), which calls for reducing carbon emissions from the U.S. power sector 32% below 2005 levels by 2030.

In October 2017, he notably led a proposal to repeal the CPP, following an order from Trump earlier in the year to “suspend, revise or rescind four actions related to the Clean Power Plan that would stifle the American energy industry.”

On April 2, Pruitt announced the completion of a midterm evaluation process for greenhouse-gas (GHG) emissions standards for cars and light trucks for model years 2022-2025. Claiming the Obama administration’s EPA “made assumptions about the standards that didn’t comport with reality and set the standards too high,” Pruitt vowed to set a standard “that allows auto manufacturers to make cars that people both want and can afford.” Several environmental and public interest groups, as well as an 18-state coalition led by California, have since filed lawsuits over the decision.

The Sierra Club, a longtime advocate of Pruitt’s leaving his post at the EPA, says it garnered more than 100,000 comments pushing for Pruitt to be axed. The group says it also “helped expose many of his scandals” thanks to Freedom of Information Act requests.

In response to the resignation, Michael Brune, executive director of the Sierra Club, calls Pruitt “the worst EPA administrator in history.”

In a statement, Brune gives credit to “the many Americans on both sides of the aisle who have taken action and spoken out to oust one of the most corrupt officials in the history of our nation.”

He says the Trump administration “can be assured that same energy and passion that helped boot Scott Pruitt will be focused on ensuring the next EPA administrator works for the public, not corporate polluters.”

As for the next EPA head, Trump has named the agency’s deputy administrator, Andrew Wheeler, as acting administrator.

“I have no doubt that Andy will continue on with our great and lasting EPA agenda,” Trump tweeted on Thursday. “We have made tremendous progress and the future of the EPA is very bright!”

“Senators must confirm a nominee who will hold the health and safety of American families in higher regard than the profits of big polluters,” he adds.

Johannes Escudero, CEO of the Coalition for Renewable Natural Gas, says the coalition “looks forward to working constructively with Acting Administrator Wheeler to ensure that the Renewable Fuel Standard continues to benefit the American people, our economy and the environment by growing domestic production of biofuels like renewable natural gas and reducing dependence on foreign oil.”

“Producers of renewable natural gas in North America have supplied over 95 percent of the cellulosic biofuel used in the Renewable Fuel Standard program, administered by the U.S. EPA,” Escudero notes.

The Natural Resources Defense Council (NRDC) expressed concerns about Wheeler in April, calling him an “unabashed climate denier” but someone with “more friends than enemies in Washington.” Notably, NRDC brought up Wheeler’s previous job as legislative aide to U.S. Sen. Jim Inhofe, R-Okla., author of the book The Greatest Hoax: How the Global Warming Conspiracy Threatens Your Future and who NRDC calls “without question the most virulent climate denier on Capitol Hill.”

In a statement, Inhofe says Pruitt “did great work to reduce the nation’s regulatory burdens facing our nation while leading the Environmental Protection Agency.”

Touting Wheeler as “the perfect choice to serve as acting administrator,” Inhofe notes that the two worked together for 14 years. With an “impeccable reputation” and “the experience to be a strong leader at the EPA,” Wheeler – according to the senator – “will continue the important deregulatory work that Scott Pruitt started while being a good steward of the environment.”

On the other hand, Ana Unruh Cohen, managing director for government affairs at NRDC, claims that Wheeler is “equally unqualified [as Pruitt] to serve as the nation’s chief environmental steward.”

“Like Pruitt, this veteran coal lobbyist has shown only disdain for the EPA’s vital mission to protect Americans’ health and our environment,” Cohen says in a statement. “Make no mistake: We’ll fight Wheeler’s pollution agenda with the same vigor as we did Pruitt’s.”

“It took an endless stream of ethical lapses for Scott Pruitt to lose his job, but he never should have had that position in the first place, nor kept it as long as he did, given his actions to undermine core environmental protections such as clean air and clean water,” comments Christy Leavitt, the senior director of Environment America’s Campaign to Defend Our Environment, in a statement.

“Presidents don’t always get a ‘do-over’ so soon after appointing cabinet secretaries who fail to properly serve the American people,” she continues. “We call on the president to remember that conservation is part of being conservative. And we implore him to honor the bipartisan history of environmentalism from Republicans Theodore Roosevelt and Richard Nixon through modern administrations by nominating a true protector of the environment – so that his children and grandchildren, as well as ours, can inherit an Earth worth inheriting.”

Ken Kimmell, president of the Union of Concerned Scientists, suggests that it’s time for the EPA to “clean house.”

“In 1983, after a series of ethics violations plagued the EPA, President Reagan turned to Bill Ruckleshaus to lead the agency,” Kimmell says in a statement. “The independent and experienced leader cared deeply about the future of the agency and restored its effectiveness. The next EPA administrator needs to be someone who will uphold independent science and commit wholeheartedly to the agency’s science-based mission of protecting public health and the environment. Until then, Congress should conduct considerably more oversight because political appointees at the EPA are sidelining science and compromising the agency’s effectiveness.”