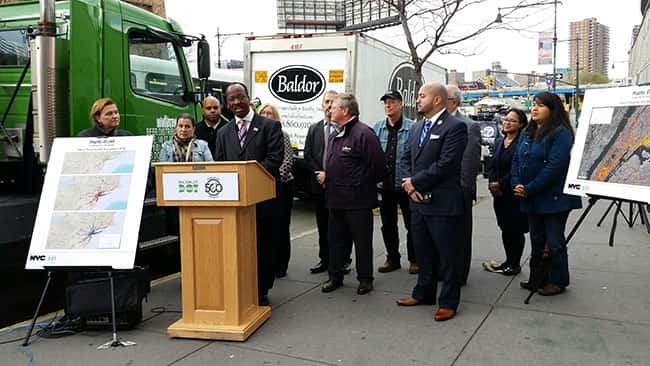 Since launching in 2012, the program has led to the replacement, retrofit and retirement of 500 older heavy-polluting diesel trucks with model-year 2010 and newer diesel-hybrid, compressed natural gas (CNG), and diesel Class 3 to Class 8 vehicles.

According to the NYC DOT, these clean trucks have resulted in significant environmental benefits by helping to improve air quality in the South Bronx. The program has also provided funds to retrofit another six trucks and scrap 24 other vehicles.

HPCTP was funded primarily through a Federal Highway Administration Congestion Mitigation and Air Quality Improvement grant, and it has a primary impact on the Hunts Point and Port Morris areas in the Bronx, as well as on the Central Bronx, Highbridge/Morrisania and the Mott Haven area in the borough.

The NYC DOT says the program is on track to awarding nearly $14.75 million to applicant fleets that either reside in or do business regularly within the Hunts Point community and markets in the Bronx. That equates to an average rebate of $30,000 per truck.

Rebates are given in fixed dollar amounts, based on the size and age of the truck, the type of technology chosen for the new replacement vehicle, and an analysis that includes incremental cost differences between a conventional vehicle and one that operates on alternative fuel technology or fuels.

“This program is cutting dangerous and dirty diesel-truck emissions in some of the New York City neighborhoods most affected by traffic-related air pollution and the diseases it causes. At the same time, we are creating a welcome reduction in the fossil-fuel gases that contribute to global climate change,” says Michael Replogle, the NYC DOT’s deputy transportation commissioner for policy.

“By requiring the installation of automated vehicle location (AVL) technology, the HPCTP shows that the clean air benefits accrue to the Hunts Point and Port Morris community and extend beyond the tri-state region,” explains Charles Ukegbu, the NY DOT’s assistant commissioner for regional and strategic planning division. “The AVL data confirms that 95 percent of trucks participating in the program access the South Bronx at least twice a week, and these cleaner trucks result in positive environmental benefits for the area.”

Photo: NYC DOT and Federal Highway Administration officials were joined by HPCTP participants Baldor, Manhattan Beer and Victory Foods for the announcement made earlier this month in the Bronx.