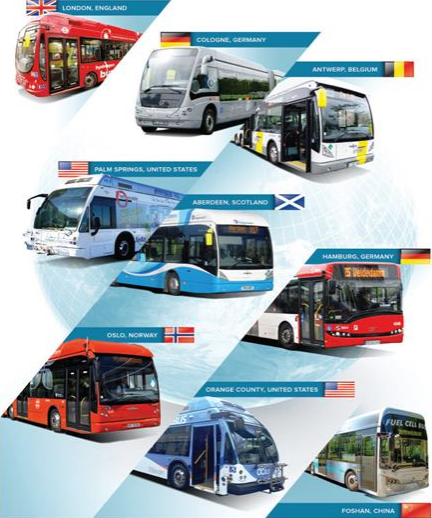 In its first release of the year, Ballard Power Systems says that it has powered fuel cell electric buses for more than 6.2 million miles (10 million cumulative kilometers) of revenue service, which is equivalent to circling the earth 250 times at the equator.

According to Ballard, this milestone has been achieved across the company’s seven generations of its FCveloCity fuel cell engine, which have been deployed in 15 countries on five continents during the past 10 years.

Over this period, Ballard has worked with 13 bus manufacturers to develop a variety of fuel cell bus configurations that have been deployed in a range of climatic conditions and operated under a host of demanding duty cycles.

Currently, Ballard FCveloCity engines are powering more than 80 buses around the globe: 41 in Europe, including Belgium, Germany, Italy, the Netherlands, Norway, Scotland and the U.K.; 24 in the cities of Foshan and Yunfu, China; 13 in the U.S., including the states of California, Massachusetts, Michigan and Ohio; three in Brazil; and one in India.

Ballard says it is seeing increased market demand for FCveloCity fuel cell engines of various sizes for use in a number of different vehicle types, including the following:

“The achievement of 10 million cumulative kilometers of revenue service is a major industry and corporate milestone,” comments Randy MacEwen, Ballard’s president and CEO. “We are moving beyond technical validation into commercial scaling at a time where market demand is at a breakthrough inflection point.”

Kevin Colbow, Ballard’s vice president in technology and product development, says, “We are extremely pleased with the evolution of our fuel cell engine development work and with the widespread implementation of demonstration programs around the globe over the past 10 years. Ballard has reduced fuel cell engine product cost by 75 percent over this period, and we have improved engine reliability, durability and performance of our plug-and-play solutions to a highly competitive level. We are strongly positioned for rapid growth in scaled commercial revenue service deployments now under way and planned in China, Europe and the United States.”

In the past year, FCveloCity-MD 30 kW and FCveloCity-HD 60 kW product extensions have been added to Ballard’s FCveloCity-HD 85 kW product in order to broaden the addressable range of motive applications, from smaller commercial vehicles and 24-foot buses, up to large articulated buses. In addition, the FCveloCity-XD 200 kW product will be capable of powering light rail systems, the company notes.

Fuel cell buses manufactured and integrated by Ballard’s partners and equipped with Ballard engines typically offer a host of important attributes, including a 220-mile (350-kilometer) range between refuelings; rapid refueling in as little as seven minutes; improved fuel economy compared with diesel buses (1.5x); route flexibility, with no need for en-route recharging; and reduced noise and smoother ride for improved passenger riding experience.