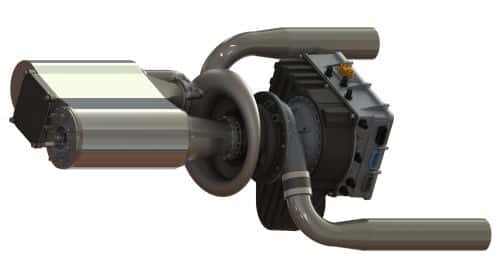 According to the company, the 80 kW Fulcrum weighs in at 250 lbs. – approximately 1/10th the weight of its piston generator counterparts – and is designed to have a 10,000-hour lifetime. Its multi-fuel capabilities allow it to burn diesel, compressed and liquefied natural gas, propane, biodiesel and others.

As Wrightspeed explains, the Fulcrum will not provide direct propulsion to the drive wheels but be used to recharge the battery system. This means that the Fulcrum is only used when it is needed and can run at the most efficient operating point, the company says.

‘The automotive industry is in the midst of a fundamental disruption, with electric vehicles merely symbolizing the beginning of the movement. The Fulcrum, together with our range-extended EV architecture, is perfectly suited for achieving maximum efficiency in extremely high-power stop-and-go applications, such as garbage trucks,’ says Ian Wright, CEO and founder of Wrightspeed.

‘For many of the same reasons that aviation changed from piston engines to turbines decades ago, we believe turbines will begin to replace piston engines in range-extended electric vehicle applications.’

With the Fulcrum, Wrightspeed, whose flagship product is the Route, says it now owns 100% of the intellectual property of its powertrain products.