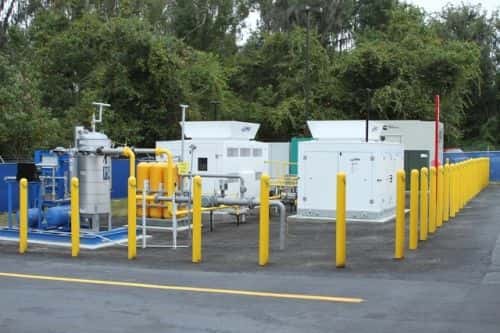 WCA Waste Corp., a solid-waste company with operations in 12 U.S. states, has cut the ribbon on its newest compressed natural gas (CNG) station, designed and built by TruStar Energy.

The time-fill CNG refueling facility is located in Gainesville, Fla. – the first in the city – and will support WCA's local fleet of more than 50 natural gas vehicles (NGVs).

‘This two-compressor station allows them to increase their efficiencies by fueling on site using fuel that is about half the price of diesel and domestically produced,’ says Scott Edelbach, vice president of TruStar Energy. ‘We designed the station for expansion, should WCA choose to do so.’

Robert Mecchi, WCA's vice president of fleet and procurement, says the company will be installing several CNG stations at various locations in the coming years in order to accommodate its aggressive NGV goal: an 80% CNG-fueled fleet by 2017.