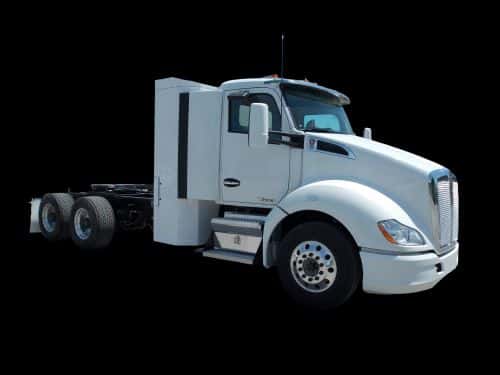 Art Holbert, Trilogy's vice president of sales and engineering, explains the company launched its first-generation platform in 2012, and the systems ranged from 112 DGEs to 148 DGEs. He says the company then built on its success and created lighter systems with more capacity.

“The biggest obstacle we noticed when meeting with potential customers was our weight,” says Holbert. “We designed our systems to be rugged and exceptionally durable, but for our second generation, we had to find a balance.”

In addition to the increased fuel capacity, Trilogy says the newest systems weigh an average of 20% to 25% less than the first generation while still maintaining their structural integrity and vocational style. Furthermore, the company notes the second-generation systems come with a 20% lower cost of ownership than their predecessors and include several patent-pending performance enhancements.

“We are working hard to be both innovative and competitive,” says Holbert, adding that Trilogy also offers a unibody, 60-DGE mini back-of-cab CNG system.

The company announced the mini system earlier this year and says the product's small footprint allows a tighter turn radius and works well for dual-fuel vehicles, as it can be used without removing the diesel saddle. That system features Luxfer G-Stor Pro Type 3 cylinders.

[…] include back-of-cab and rail-mount CNG systems in a variety of sizes. In August, the company touted increased benefits of its second-generation back-of-cab systems, which Trilogy said ranged from 120 […]