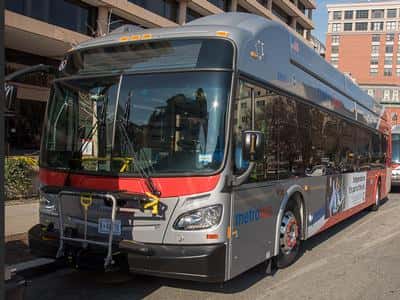 The new vehicles are the first five under a large order of nearly 300 CNG buses to replace Metro’s CNG buses that have been in service for 15 years and are at the end of their useful life. The new buses will run on routes that originate out of Metro’s Bladensburg division, which primarily serves northeast D.C. and parts of Prince George’s County.

“Our new fleet of buses is another step in our ongoing commitment to improve service and reliability for the half-a-million customers who use Metrobus each weekday,” says Paul J. Wiedefeld, Metro general manager/CEO. “As these new buses enter service, the average Metrobus age will drop to less than seven years old – an all-time low – resulting in more reliable service and fewer mechanical delays.”