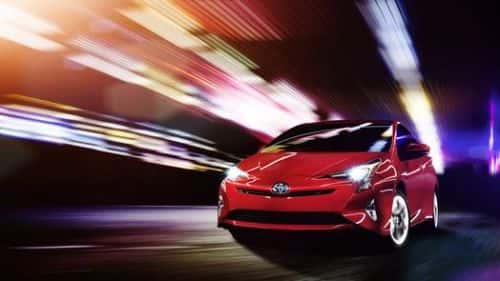 On Tuesday night at an event in Las Vegas, Toyota revealed its fourth-generation Prius gasoline-electric hybrid car, and the manufacturer says the model-year 2016 vehicle offers better fuel economy and a sleeker look than its predecessor.

The new Prius is slated to arrive in dealerships early next year. Toyota says the 2016 core models are expected to have a 10% improvement in EPA-estimated MPG compared to the 2015 Prius models, which according to the company's website, offer 51 MPG city and 48 MPG highway. The company adds that a soon-to-be-unveiled Eco model will achieve an even greater improvement, but the manufacturer has not revealed further details about that Prius.

The 2016 Prius will also be among the first U.S. models to offer Toyota Safety Sense, a new multi-feature safety package anchored by automated pre-collision braking. In addition, Toyota says the Prius' exterior has been completely reimagined. From the side, it is longer and sleeker, with the overall outline evoking an athletic shape. The hood is lower, and the roof peak has been moved forward.

Engineered from the ground up, the new Prius is 2.4 inches longer, 0.6 inches wider and 0.8 inches lower than the model it replaces, providing a planted on-road presence while delivering more occupant and cargo room, according to Toyota.

“Prius set the global benchmark for hybrids, but now is breaking its own boundaries with more engaging style and fun-to-drive dynamics,” says Toyota's Bill Fay. “What was once a rational purchase that for many customers focused on fuel economy, is now so much more.”