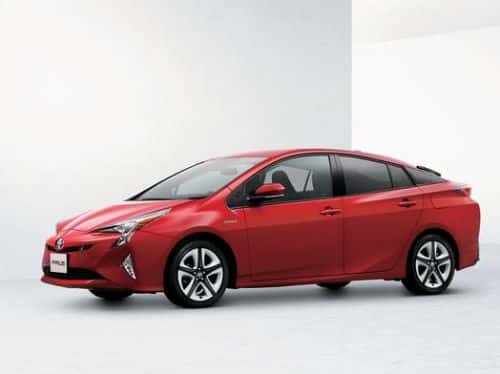 After revealing its 2016 Prius gasoline-electric hybrid car in September, Toyota has released more details about the redesigned vehicle.

Toyota says it has made significant improvements in its new-generation full hybrid powertrain, reducing losses, redesigning and relocating key components, and reducing weight. The manufacturer adds that extensive changes to the transaxle, engine and combined hybrid system generate an expected 10% improvement in EPA-estimated MPG on core models compared to the 2015 Prius, with an Eco model that will achieve an even greater improvement. In fact, Toyota claims this fourth-generation Prius will offer “the highest fuel economy of any vehicle without a plug.”

The 2016 Prius features a fully re-engineered 1.8-liter VVT-i gasoline engine, which Toyota says achieves a maximum thermal efficiency of 40%. This improvement was enabled, in part, through the use of a large-volume exhaust gas recirculation system and improvements in combustion efficiency. Additionally, a redesigned air intake port improves airflow inside the combustion chamber, while the coolant passages have been redesigned to optimize internal engine temperature.
Â
Fuel efficiency is also boosted by improvements to heating performance, continues Toyota. For example, an active grille shutter has been added to open and close the grille as necessary in response to outside temperatures.

The transaxle and motor have been redesigned, delivering a reduction in their combined weight. The motor itself is considerably more compact and gains a better power-to-weight ratio. Notably, Toyota says, there is a 20% reduction in mechanical losses through friction compared to the previous model. The planetary gear arrangement in the reduction gear has been replaced with parallel gears, which further helps loss reduction.

The 2016 Prius will be available with either a new lithium-ion or a new nickel-metal hydride hybrid battery. While the batteries use established technology, Toyota says it has succeeded in increasing their energy density, which means more power can be obtained from a smaller unit. This, in turn, has allowed the battery to be relocated beneath the rear seat, increasing cargo space.

The new Prius will arrive in dealerships early next year. More information on the vehicle is available here.