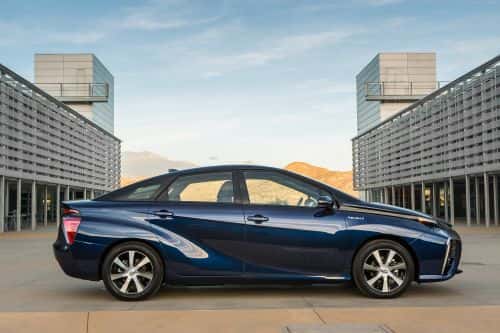 The vehicle will also have an EPA-estimated driving range rating of 312 miles on a single fill of hydrogen, and Toyota claims the Mirai is the only zero-emission EV on the market that tops the 300-mile-range milestone.

‘Toyota realized in the early 90s that electrification was key to the future of the automobile,’ said Lentz. ‘Just as the Prius introduced hybrid-electric vehicles to millions of customers nearly 20 years ago, the Mirai is now poised to usher in a new era of efficient, hydrogen transportation.’

According to Toyota, the Mirai is a four-door, midsize sedan with performance that fully competes with traditional internal combustion engines without using gasoline. Instead, Mirai creates electricity on demand using hydrogen, oxygen and a fuel cell, and emits nothing but water vapor in the process, adds the company.

Toyota says that it will also provide Mirai drivers with a comprehensive range of services, including the following:Â Â

– Three years' worth of complimentary fuel;

– Enhanced ToyotaCare, offering no-cost scheduled maintenance for three years, or 35,000 miles, whichever comes first; as well as no-cost enhanced roadside assistance for three years, regardless of mileage, including expedited towing service and trip interruption reimbursement at a maximum of $500 per day for up to five days per incident; and

Beginning this summer, California customers can request a Mirai by visiting www.toyota.com/mirai.