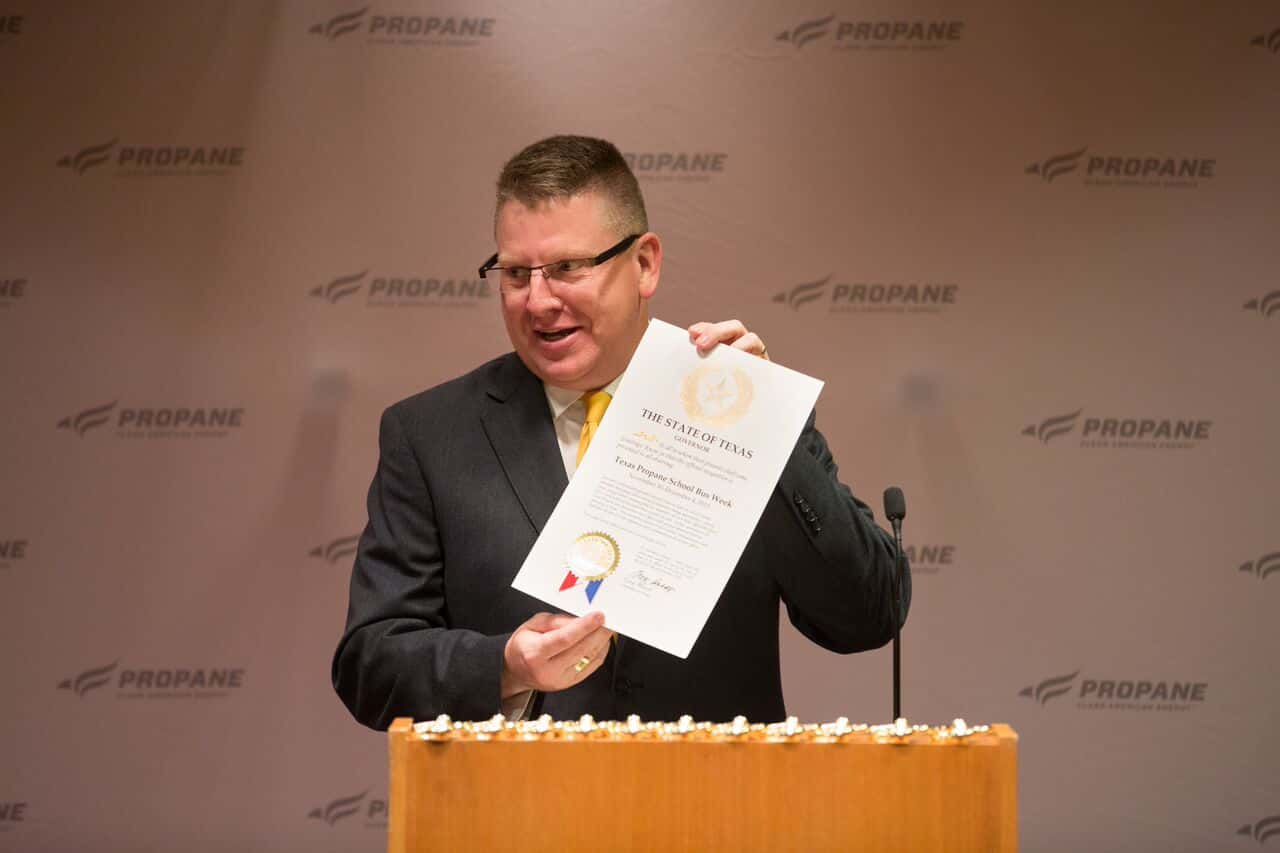 Citing the vital role propane autogas plays in powering thousands of school buses in school districts across the state, Texas Gov. Greg Abbott has proclaimed the week of Nov. 30 to Dec. 4 as “Texas Propane School Bus Week,” according to the Propane Council of Texas (ProCOT).

A celebration commemorating a decade of autogas-powered school buses was held on Tuesday at the Texas Education Agency in Austin to coincide with the governor’s announcement. The event was sponsored by the ProCOT in conjunction with the Propane Education & Research Council (PERC) and hosted by Texas Commissioner of Education Michael Williams. Remarks from Williams and state Rep. Tony Dale highlighted the event.

The Texas House of Representatives, led by Dale, has issued a resolution celebrating the 10th anniversary of a group that met in Austin to discuss the concept and development of a factory-built propane bus. Founders of the group were honored at Tuesday’s event.

“The state of Texas has accomplished a significant feat in the last 10 years in bringing clean and affordable fuel to so many school districts,” said Curtis Donaldson, president of CleanFuel USA and initial meeting attendee. “It’s a testament to the hard work of many people that, with a little ingenuity, we could bring a better alternative fuel option to school transportation throughout this state – and beyond.”

ProCOT says that since that first meeting in 2005, all three major school bus manufacturers now offer autogas buses. According to the Texas Railroad Commission, more than 2,600 autogas buses are currently in operation in school districts across the state.

Furthermore, ProCOT says more than 400 school districts throughout the U.S. are operating more than 7,000 autogas school buses on a daily basis. In all, more than half a million children ride such buses to and from school, the group adds.

“More and more school districts across the country are facing tighter transportation budgets, and they must use their resources more wisely,” said Roy Willis, president and CEO of PERC. “Propane autogas school buses help districts lower their fuel budgets, but the benefits don’t stop there: Propane school buses improve passenger safety and reduce harmful emissions compared with their diesel bus counterparts, too.”