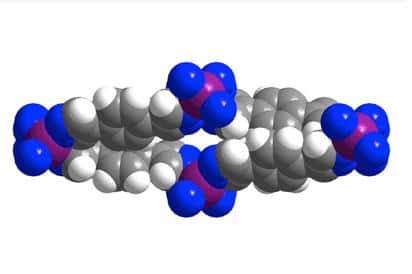 A new and innovative way to store methane could speed the development of natural-gas-powered cars that don’t require the high pressures or cold temperatures of today’s compressed or liquefied natural gas vehicles, according to the University of California, Berkeley.

In a recent press release, the university says that natural gas is cleaner burning than gasoline, and today there are more than 150,000 compressed natural gas (CNG) vehicles on the road in the U.S., most of them trucks and buses. However, UC Berkeley says that until manufacturers can find a way to pack more methane into a tank at lower pressures and temperatures, allowing for a greater driving range and less hassle at the pump, passenger cars are unlikely to adopt natural gas as a fuel.

UC Berkeley chemists have now developed a porous and flexible material – a so-called metal-organic framework (MOF) – for storing methane that addresses these problems. The university says the flexible MOF collapses when the methane is extracted to run the engine, but expands when the methane is pumped in at only moderate pressure, within the range produced by a home compressor.

“You could potentially fill up at home,” comments Jeffrey Long, a UC Berkeley professor of chemistry who led the project.

The university claims the flexible MOF can be loaded with methane, the main ingredient of natural gas, at 35 to 65 times atmospheric pressure (500-900 psi), whereas CNG vehicles compress natural gas into an empty tank under 250 atmospheres (3,600 psi).

The university notes that liquefied natural gas (LNG) vehicles operate at lower pressures but require significant insulation in the tank system to maintain the natural gas at -162 degrees C so that it remains liquid.

Long says next-generation natural gas vehicles will require a material that binds the methane and packs it more densely into the fuel tank, providing a larger driving range. One of the major problems has been finding a material that absorbs the methane at a relatively low pressure, such as 35 atmospheres, but gives it all up at a pressure where the engine can operate, between 5 and 6 atmospheres. UC Berkeley says MOFs, which have a lot of internal surface area to adsorb gases – that is, for gas molecules to stick to the internal surfaces of the pores – and store them at high density, are one of the most promising materials for adsorbed natural gas (ANG) storage.

“This is a big advance both in terms of capacity and thermal management,” says Long. “With these new flexible MOFs, you can get to capacities beyond what was thought possible with rigid MOFs.”

Among the other advantages of flexible MOFs, Long says, is that they do not heat up as much as other methane absorbers, so there is less cooling of the fuel required.

“If you fill a tank that has adsorbent, such as activated charcoal, when the methane binds it releases heat,” he says. “With our material, some of that heat goes into changing the structure of the material, so you have less heat to dissipate, less heat to manage. You don’t have to have as much cooling technology associated with filling your tank.”

UC Berkeley says the flexible MOF material could perhaps even be placed inside a balloon-like bag that stretches to accommodate the expanding MOF as methane is pumped in, so that some of the heat given off goes into stretching the bag.

Long and his colleagues at the National Institute of Standards and Technology and in Europe published their findings online in advance of publication in the journal Nature.

For more details, check out the full UC Berkeley announcement by clicking here.