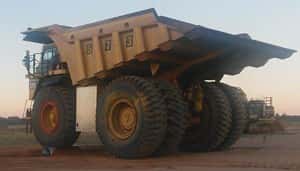 Quantum says its Q-Lite 5,000 psi prototype tank was developed using the same design and production characteristics of the company's Q-Lite line of CNG tanks already being utilized by Class 6-8 on-road trucks around North America. The company also says the toughness and durability of its Q-Lite tank is evidenced in the supplied photo, as a 140-tonne CAT 789C dump truck is driving directly over a Quantum tank without incident.

‘The mining industry is a major energy user, and mining companies around the world are increasingly focused on energy efficiency, lower emission and cost-effective ways of generating power,’ says Brian Olson, president and CEO of Quantum.

‘Although many thought mining would be dominated by [liquefied natural gas (LNG)], Quantum and its commercial partners are now proving that CNG offers a much lower-cost solution compared to diesel and LNG,” claims Olson.