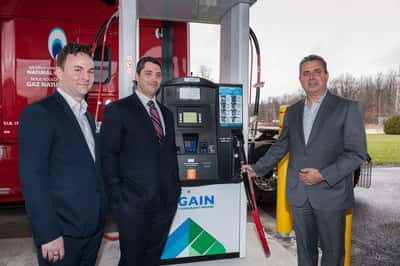 U.S. Venture Gain Fuel Canada built, owns and operates the station, which is located at 4 Transport St. in the industrial park of Coteau-du-Lac. Gaz Metro is the natural gas supplier to the facility, and in addition to serving the public, the new station will be used to support North American carrier C.A.T. Inc.’s growing fleet of CNG trucks.

“We’re proud to be a leader in the industry in utilizing CNG to reduce emissions,” says C.A.T. President Daniel Goyette. “We’ve made an investment in our future with the conversion of more than 100 trucks to CNG. It’s been a very positive move by reducing our greenhouse-gas emissions and creating fuel price stability. We couldn’t be happier with our partnership to make this facility a reality.”

Nearly a third of C.A.T.’s fleet of 350 tractors operates on CNG, and this Quebec project represents the second of five GAIN Clean Fuel stations to open in partnership with C.A.T.

The first partnership station opened in Mississauga, Ontario, in October. The other three station locations include Laredo, Texas; Charlotte, N.C.; and Scranton, Pa. These stations are finishing up on construction and will be opening soon.

“We’re thrilled to have our second location in Canada open for business,” said GAIN Clean Fuel Business Development Manager Marc-Andre Paquin. “This is one of the most heavily traveled trucking corridors in all of North America, and we look forward to serving not only C.A.T., but other carriers seeking to take advantage of the benefits. We hope this station will encourage other U.S.-based carriers to seek new opportunities in Canada.”