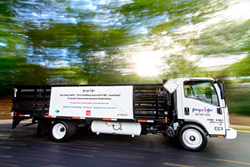 Arizona-based Campbell-Parnell says it has secured certifications for the application of the EmmeGas dual-fuel propane autogas conversion system on the Isuzu NPR-HD truck's GM 6.0 L engine.

Atlanta-based Georgia Gas Distributors, a Campbell-Parnell partner and Southeast distributor for the autogas system, has announced it will be displaying a converted Isuzu NPR-HD at the Propane Education and Research Council booth during the upcoming GIE+Expo in Louisville, Ky.

“We work with many independent propane distributors across the U.S.,” comments Campbell. “Georgia Gas has a true passion for autogas and the development of autogas in new markets, across the U.S.”