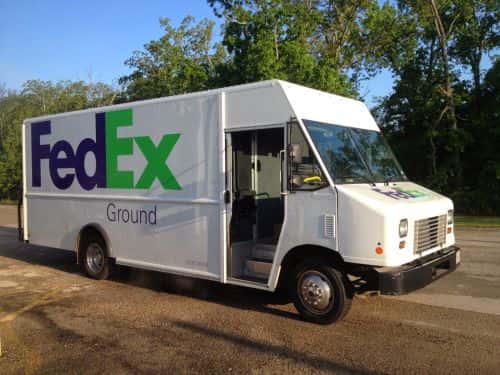 A Texas-based FedEx contractor has begun transitioning his fleet of delivery vehicles to run on compressed natural gas (CNG), starting with a step van built off a Ford F-59 stripped chassis and featuring a Westport WiNG Power System.

The contractor, Harry Carver, runs routes east of Dallas near I-20, in cities including Tyler, Longview and Kilgore. His first CNG vehicle, which features 1,000 cubic feet of space, two shelves and a rollup door, makes 90 stops a day and racks up about 36,000 miles annually. The Westport WiNG system in the F-59 is paired with a 6.8-liter Triton V-10 engine that Ford equipped with a gaseous-prep package.

‘It's getting over seven miles to the gallon,’ Carver said. ‘I have a great driver. The motor oil when you check it, it's all clean.’

Carver's fleet totals 14 vehicles – he is looking at converting four more units to CNG in the near term.

Roll on to a clean future with a clean fuel, buy wprt-cmi!! Hook up with abundant and domestic natural gas or propane, it is where you are. It is the preferred fuel of the future and the future is here now, just look listen and breathe!