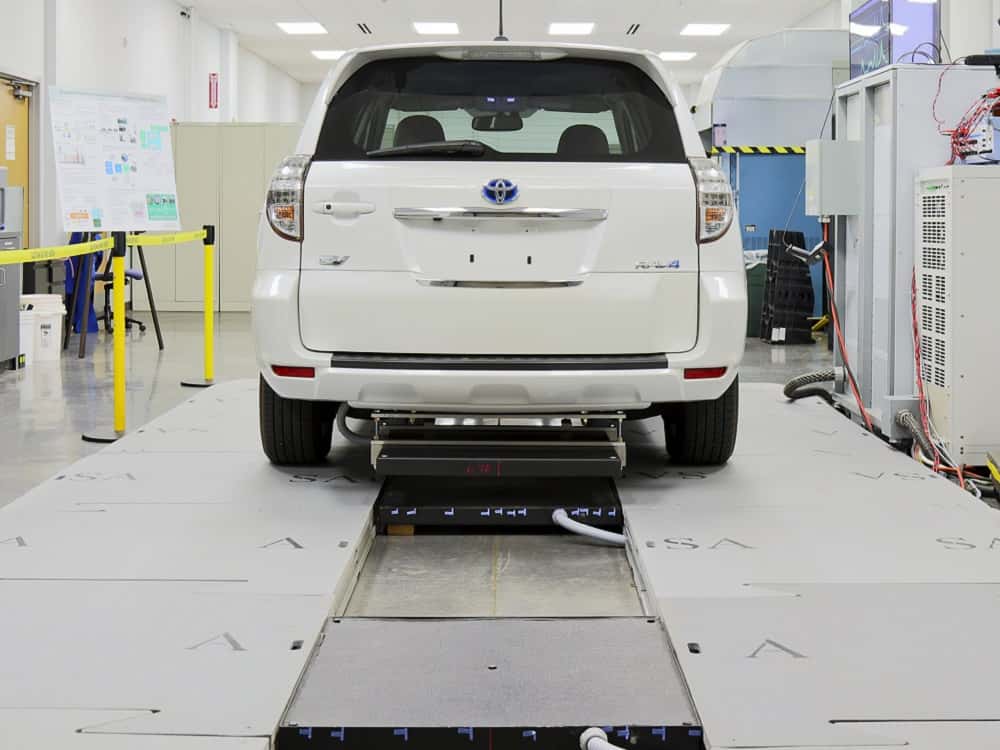 This ability to wirelessly recharge EVs can help accelerate the adoption and convenience of EVs, say ORNL reserachers. Industry partners from Toyota, Cisco Systems, Evatran and Clemson University International Center for Automotive Research all contributed to the technology demonstration.

“We have made tremendous progress from the lab proof-of-concept experiments a few years ago,” says Madhu Chinthavali, lead of ORNL’s power electronics team. “We have set a path forward that started with solid engineering, design, scale-up and integration into several Toyota vehicles. We now have a technology that is moving closer to being ready for the market.”

ORNL’s power electronics team says that it achieved this world’s first 20 kW wireless charging system for passenger cars by developing a unique architecture that included an ORNL-built inverter, isolation transformer, vehicle-side electronics and coupling technologies in less than three years. Researchers integrated the single-converter system into an Toyota RAV4 Electric equipped with an additional 10 kWh battery for the demonstration.

The researchers are already looking ahead to their next target of 50 kW wireless charging, which would match the power levels of commercially available plug-in quick chargers. Providing the same speed with the convenience of wireless charging could increase consumer acceptance of EVs and is considered a key enabler for hands-free, autonomous vehicles, say ORNL researchers. Higher power levels are also essential for powering larger vehicles, such as trucks and buses.

Researchers are focusing on safety measures in particular as they increase energy output.

“The high-frequency magnetic fields employed in power transfer across a large air gap are focused and shielded,” adds Chinthavali. “This means that magnetic fringe fields decrease rapidly to levels well below limits set by international standards, including inside the vehicle, to ensure personal safety.”

Convenience and simplicity are at the heart of the ORNL system, which places a strong emphasis on radio communications in the power regulation feedback channel augmented by software control algorithms. The result is minimization of vehicle on-board complexity as ORNL and partners pursue the long-range goal of connected vehicles, wireless communications and in-motion charging. Though the team’s initial focus has been on static, or motionless, wireless charging, the researchers also evaluated and demonstrated the system’s dynamic charging capabilities.

Wireless charging could play an increasingly important role in the future energy economy. Nissan recently demonstrated what it calls the “Fuel Station of the Future,” which includes wireless charging systems in city streets that not only charge EVs, but also use the on-board batteries as grid store for renewable energy to be tapped into on an as-needed basis. Meanwhile, transit companies such as Complete Coach Works are developing wireless charging systems for buses in order to electrify public transportation systems.