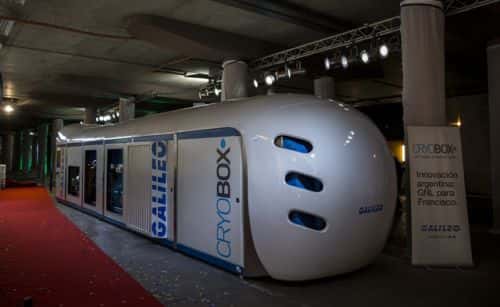 The Cryobox is a refueling ‘nanostation’ designed to produce LNG at relatively small quantities for private fleets and other consumers. Buquebus, which is using seven Cryobox units to provide LNG for one ferry that will use approximately 66 tons of fuel per day, will realize a fuel-cost savings of at least 50%, the companies say.

‘Cryobox is the result of five years of development and investigation, built on 30 years' expertise in the manufacturing of gas compressors in Argentina,’ says Osvaldo del Campo, CEO of Galileo. ‘It represents a worldwide innovative leap, as it is one-of-a-kind equipment, due to its compact dimensions and modular configuration.’

Each Cryobox unit can reach a maximum production of 12 tons of LNG per day, which is roughly equivalent to 7,000 gallons of LNG per day. The systems can also generate up to 560 GGE/hour of compressed natural gas (CNG). Cryobox modules can be trailered to a site, installed at a fueling station and then connected to a gas-distribution pipeline or other gas source for rapid commissioning.