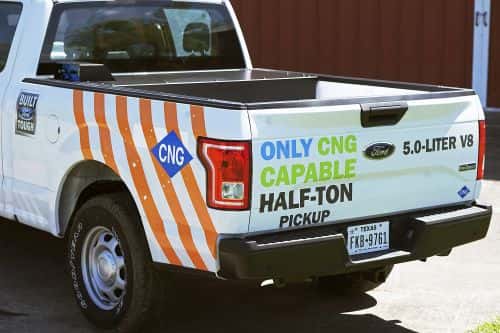 ‘We surveyed customers likely to use natural gas or propane, and 72 percent told us they want to have these alternative-fuel capabilities available on F-150 with the 5.0-liter V8 engine,’ says Jon Coleman, Ford fleet sustainability and technology manager. ‘We expect the gaseous-fuel prep package will be even more popular than it was on the 2014 F-150 with the 3.7-liter V6 engine, given the capability of the 2016 F-150 5.0-liter V8.’

The company says its factory-installed prep package includes upgraded intake and exhaust valves and valve seats. Furthermore, Ford says the 2016 F-150 with an installed CNG or propane system can haul hundreds of pounds more than a similarly equipped 2014 F-150, thanks to the use of advanced light-weighting materials.

According to the company, CNG/propane engine prep from the factory costs $315 before the customer chooses a Ford Qualified Vehicle Modifier to supply fuel tanks, fuel lines and fuel injectors. Upfits run approximately $7,500 to $9,500 depending on fuel tank capacity, the company adds.

Notably, Ford and one of its Qualified Vehicle Modifiers, Westport Innovations Inc., will be displaying the first 2016 F-150 featuring the CNG Westport WiNG Power System at the Alternative Clean Transportation (ACT) Expo in Dallas this week.

With the addition of the 2016 F-150, Ford will offer eight vehicles with the capability to run on CNG or propane.

“The growth in interest for CNG/propane-prepped vehicles shows a shift in fleet customers' mindsets,” says Dick Cupka, Ford commercial vehicle sustainability leader. “They are becoming more forward-thinking about alternative fuels, taking into account their total cost of ownership and looking for ways to reduce their vehicle emissions.”

Ford says its most popular vehicles for CNG/propane prep packages are F-Series Super Duty trucks, while prep kits for the 2014 F-150 exceeded expectations by more than 40%, with more than 2,000 units sold in less than a year. In addition, the new 2015 Ford Transit has sold 836 CNG/propane-prepped vans and wagons since it became available in the U.S. in June 2014.