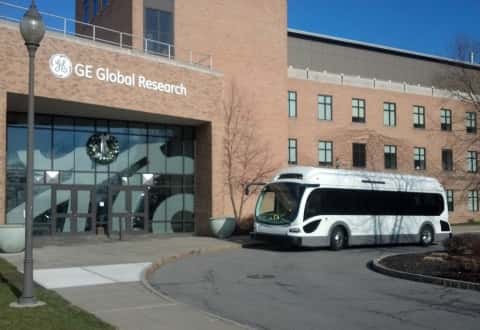 GE says it has developed an alternative-fuel bus that is powered by the company's new Durathon battery technology working in tandem with a lithium battery pack and a hydrogen fuel cell.

‘This promising development of a new energy management system could help accelerate both fuel cell acceptance and electrification of bus fleets, delivery trucks and other larger, heavy-duty vehicle fleets,’ the company says.

In 2010, the GE team first successfully demonstrated a dual battery system on a zero-tailpipe-emissions hybrid transit bus by pairing a high-energy-density sodium battery with a high-power lithium battery. Further testing using the Durathon battery has produced results that will allow for a bus to operate at full performance with a significantly smaller fuel cell than previously possible, the company says.

‘For years, fuel cells have been talked about as a clean transportation alternative, but cost has always been a roadblock to widespread adoption,’ says Tim Richter, a systems engineer at GE Global Research. ‘With GE's battery technology and dynamic dual battery management system, we're starting to push that roadblock aside.’