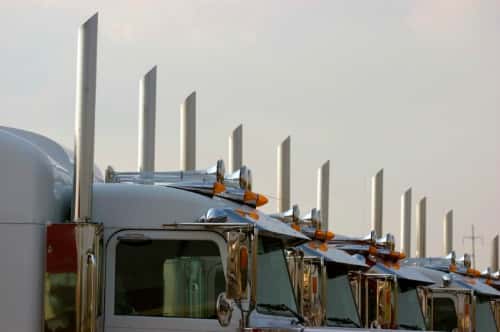 The U.S. Environmental Protection Agency (EPA) has announced the first federal enforcement of California's Truck and Bus Regulation. The agency says Virginia-based Estes Express Lines will pay a $100,000 penalty for violations of the regulation for failing to install particulate filters on 73 of its heavy-duty diesel trucks (15% of the company's California fleet).

According to the EPA, the California Truck and Bus Regulation was adopted into federal Clean Air Act plan requirements in 2012 and apply to privately owned diesel trucks and buses. The rule also requires any trucking company to ensure their subcontractors are only using compliant trucks, as well as requires companies to upgrade their vehicles to meet specific NOx and PM2.5 performance standards in California. Heavy-duty diesel trucks in California must meet 2010 engine emissions levels or use diesel particulate filters, which can reduce the emissions of diesel particulate into the atmosphere by 85% or more, the EPA adds.

“Trucks are the largest sources of air pollution in California, and the state has the worst air quality in the nation,” says Jared Blumenfeld, the EPA's regional administrator for the Pacific Southwest. “EPA's enforcement efforts are aimed at ensuring all truck fleets operating in California are in compliance with pollution laws.”

“ARB's partnership to enforce our clean truck and bus regulation with our partners at EPA is vitally important to us,” states California Air Resources Board Chair Mary D. Nichols. “It helps bring vehicles that are operating illegally into compliance, and levels the playing field for those who have already met the requirements.”

The EPA says that in addition to the penalty, Estes will spend $290,400 toward projects to educate the out-of-state trucking industry on the regulation and for replacing old wood-burning devices in the San Joaquin Valley. That includes $35,000 to the University of California Davis Extension to implement a state-approved training program for out-of-state trucking firms on compliance with the rule.

Estes is a large, private, for-hire trucking firm that owns and operates diesel-fueled vehicles in all 50 states. In February 2015, the EPA issued a notice of violation to Estes after the agency's investigation found that the company failed to equip its heavy-duty diesel vehicles with particulate filters and failed to verify compliance with the Truck and Bus Regulation for its hired motor carriers. The EPA notes Estes now operates only new trucks in California.