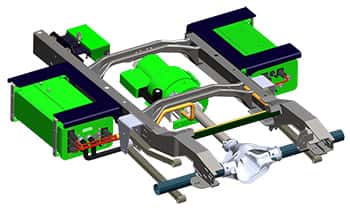 Crosspoint Kinetics says it is excited to confirm that its Kinetics Hybrid electric hybrid system fits virtually most Class 3-7 delivery and work trucks, including the Isuzu Reach platform, the Ford E-350, the Dodge 5500, the Chevy 4500, and dozens more.

‘As long as the front-engine, rear-drive vehicle has a wheelbase of at least 158 inches, we can bolt on the Kinetics Hybrid system,’ says Amy Dobrikova, VP of business development and strategy at Crosspoint Kinetics. ‘That makes the Kinetics Hybrid a more versatile system for fleets that lease, run multiple models, or that want to move the hybrid from one vehicle to another based on when they retire their vehicles.’

According to Crosspoint Kinetics, the Kinetics Hybrid system bolts on to new or existing vehicles to quickly transform Class 3-7 vehicles into more fuel-efficient and cleaner-running vehicles. Fleets have reported up to 30% more miles per gallon and a comparable reduction in emissions when the hybrid is used in heavy start/stop duty cycles, the company adds.

Some of the chassis the Kinetics Hybrid fits on include the following:

Fleet owners are able to purchase the Kinetics Hybrid directly from Crosspoint Kinetics or through the company's distributors, including Arboc, Champion, Glaval, Goshen, Morgan Olson and Utilimaster.