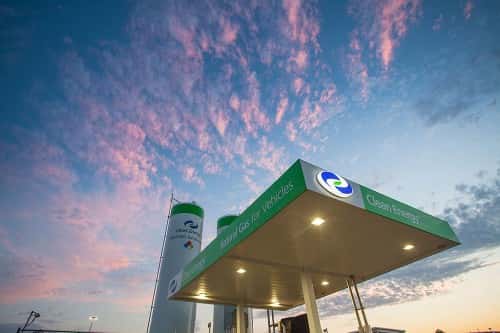 The procurement includes rebuilding a large compressed natural gas (CNG) fueling station, as well as additional garage modifications and the repair and maintenance of facilities through 2020. NJ Transit is expected to operate a fleet of 147 CNG commuter buses estimated to consume approximately 2 million gasoline gallon equivalents (GGEs) each year.

Clean Energy also signed other agreements across the transit, refuse and trucking markets, including the construction of new stations and extended maintenance and fueling contracts.

SP+, a provider of professional parking management, has signed a five-year fueling agreement with Clean Energy to fuel 16 CNG buses for a new Consolidated Rent-A-Car facility located at the San Diego International Airport. The buses, owned by the San Diego Airport Authority, are anticipated to consume approximately 27,000 GGEs per month and will fuel with Redeem, Clean Energy’s renewable natural gas derived from biomethane.

Raven Transport will deploy an additional 10 new LNG tractors out of Clean Energy’s Fort Worth, Texas, station starting in early March, which are expected to consume approximately 220,000 GGEs annually. The fueling contract runs through 2020.

New customer Blackrock Logistics, based out of Pleasanton, Calif., has deployed 10 CNG trucks for its fleet and will be fueling at Clean Energy’s Fontana, Calif., station. The three-year fueling agreement represents approximately 110,000 GGEs of CNG each year.

Finally, Clean Energy Fuels, the hard working natural gas fuel company has started its way back to its place in the future of American transportation. Clean Energy Fuels and other natural gas pioneers are (and have been) flying under the radar, of an oblivious and dishonest media, who are unwilling to report the staggering growth and widening acceptance of this God given, clean and abundant fuel. Self seeking and corrupt politicians are also to blame. But LNG & CNG will prevail despite the efforts of this elite scum. No one can stop what’s coming; nat gas is here to stay.… Read more »