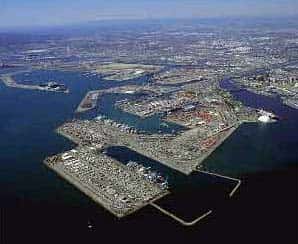 The Port of Long Beach, Calif., recently announced that it has surpassed every air-pollution reduction milestone set for 2014 due to various air quality improvement initiatives, including a Clean Trucks Program.

According to an annual emissions survey, the port has reduced diesel particulates by 85% since 2005, nitrogen oxides by 50% and sulfur oxides by 97%. These reductions surpassed the goals established under the San Pedro Bay Ports Clean Air Action Plan.

Citing the port’s 2014 emissions inventory in a new analysis, the Diesel Technology Forum says the majority of trucks that service the port’s terminals – more than 91% – are diesel-fueled vehicles. Alternative fuel trucks, primarily those powered by liquefied natural gas, made approximately 8.2% of the terminal calls in 2014, according to the Port’s Clean Trucks Program activity records and the Port Drayage Truck Registry.

“The Port of Long Beach has shown that accelerating investments in new-technology clean diesel trucks has propelled the port to both environmental and economic gains. It also lays the foundation for continued progress toward future goals,” says Allen Schaeffer, executive director of the Diesel Technology Forum.

The forum says the port prohibits trucks older than model-year (MY) 2007 from entering the complex and requires that trucks register with the port. There are a small number of pre-2007 trucks that get access on a one-time basis but have to pay a significant fee, the forum adds. According to the dray truck registry, about 60% of the 16,887 registered trucks entering the port are MY 2007-2009. The remainder are MY 2010 or newer.

Other reasons for the air quality improvements included low-sulfur fuel regulations for ships, increased use of shore power for cargo ships,  and the port’s Green Flag Vessel Speed Reduction Program.

In a press release form the port, Long Beach Mayor Robert Garcia says, “The Port of Long Beach remains the greenest port in the world, reducing emissions while increasing economic activity. The port’s consistent commitment to sustainability and our environment should be celebrated.”