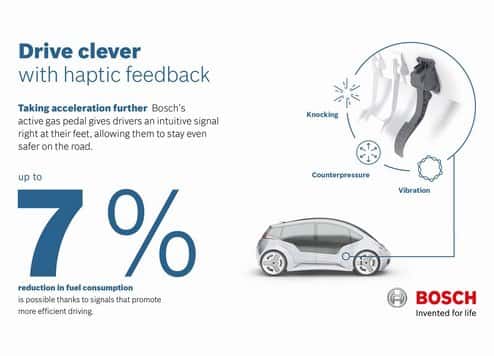 Bosch says it has developed an active gas pedal that, via gentle vibration, tells drivers when they have crossed the line from light touch to lead foot.

According to the company, the feedback drivers get from the pedal allows them to reduce fuel consumption by as much as 7%. This is possible because the gas pedal can be networked with other automotive functions, such as the transmission. Up until now, the company says, the only indication drivers have had of the best time to shift gear has been in the form of small arrows on the instrument display. The active gas pedal comes with the option of a palpable indication of the best time to shift gear.

“The pedal tells the driver when the economy and acceleration curves intersect,” explains Seiberth. If the driver still wants to accelerate some more before shifting gear, however, applying a little extra pressure is enough.

If the vehicle has an assistance system, the pedal also becomes a warning indicator. Coupled with the navigation system or a camera that recognizes road and speed-limit signs, the Bosch gas pedal gives drivers a haptic warning signal if, for example, drivers are approaching a dangerous bend at too high a speed.

If drivers exceed the speed limit, the gas pedal will warn them by vibrating or exerting counter pressure. Via the vibrating pedal, the connected car will pass on warnings about dangerous situations – wrong-way drivers, unexpected congestion, crossing traffic and other hazards along the planned route – to the person at the wheel.