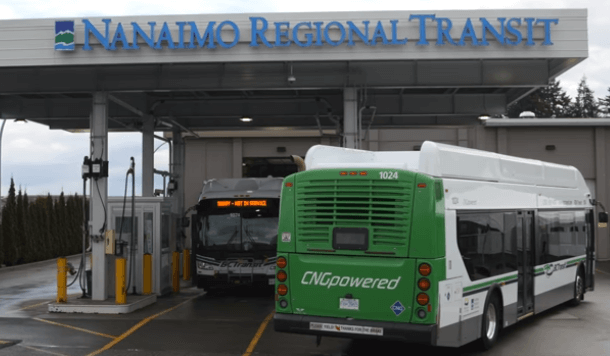 British Columbia’s BC Transit continues to add compressed natural gas (CNG) buses to its fleet across the province as part of its commitment to reduce greenhouse-gas emissions.

The advantages of CNG technology are both environmental and economic, with notable reductions in tailpipe emissions and operational costs, says BC Transit, which provides service to more than 130 communities across B.C. in collaboration with 58 local government partners.

BC Transit will be welcoming the first 30-foot medium-duty CNG buses to its fleet over the next two years. In addition, new heavy-duty buses have been added to BC Transit fleets across the province, and more are on the way. Whistler has welcomed four new buses, while fleets in Nanaimo and Kamloops have each added two.

“These new CNG buses are a step forward in our efforts to reduce greenhouse-gas emissions throughout our transit systems,” says Erinn Pinkerton, president and CEO of BC Transit. “The investments in Whistler, Nanaimo and Kamloops have demonstrated the benefits of using CNG buses, and I look forward to seeing more CNG buses across the province.”

The medium-duty Vicinity CNG buses by Grande West can carry 24 seated passengers and up to 20 standing passengers. The 34 buses represent an investment of C$17 million. To help offset the initial costs associated with the purchase of the new buses, FortisBC will provide funding of up to C$346,375. This funding represents 25% of the cost differential of CNG buses over diesel counterparts.

“Moving to compressed natural gas from gasoline or diesel is an all-around win for our transportation customers by cutting both fuel costs and emissions,” comments Doug Stout, vice president of market development and external relations at FortisBC. “We’re proud to work with BC Transit to take strong steps forward to a lower-carbon future.”

The heavy-duty XN40 Xcelsior CNG buses by New Flyer can carry 35 seated passengers and 46 standing passengers. The purchase of the eight new vehicles represents an investment of C$6 million in the Whistler, Nanaimo and Kamloops Regional Transit Systems.

In total, the existing BC Transit fleet has 128 CNG buses. New operations and maintenance facilities currently under construction in Campbell River, Cowichan Valley and Central Fraser Valley are all being equipped with provisions to house a future CNG fleet. Natural gas for BC Transit’s CNG fleets is supplied by FortisBC. The CNG fueling stations are built and maintained by Clean Energy.