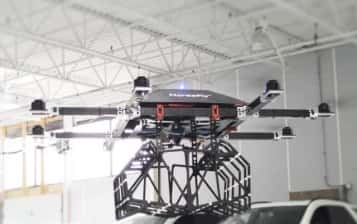 Workhorse Group Inc. – developer of electric vehicles and the HorseFly, a delivery drone designed to be used in tandem with the company’s electric work trucks – has received a commercial exemption from the Federal Aviation Administration (FAA) for further research and development of the system.

Weighing 15 lbs., the HorseFly octocopter has a payload capacity of 10 lbs. and can achieve a maximum speed of 50 mph and a flight time of 30 minutes.

Workhorse says that by using a touchscreen interface in its delivery truck, the driver inputs a destination, and the HorseFly can launch itself from the roof of the vehicle, ascend to a safe cruising altitude and navigate autonomously to the desired delivery point (e.g., a house’s front stoop) to drop off a package.

This Section 333 exemption follows the receipt of a Certificate of Waiver or Authorization to the Ohio/Indiana UAS Center and Test Complex – which allows Workhorse and the University of Cincinnati to continue their joint development of the HorseFly at the Wilmington Air Park in Ohio.

Stephen Burns, CEO of Workhorse Group, says the commercial exemption “represents a key milestone” in the development of the system. The company, then AMP Trucks, first revealed a prototype of the HorseFly drone in June 2014.