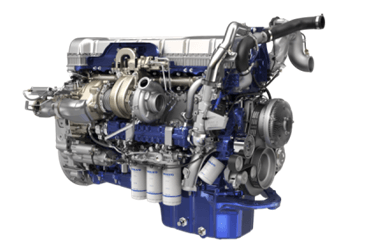 “Since their introduction, we’ve found our lineup of GHG 2017 engines – particularly the D13TC – to be the most fuel-efficient we’ve ever offered in North America,” says Göran Nyberg, president of Volvo Trucks North America.

“Now, combined with an additional once percent fuel efficiency benefit from the improved aerodynamics of the new VNL series, customers spec’ing the D13TC will see up to a 7.5 percent improvement overall,” he says.

According to Volvo, the 13-liter Volvo D13TC, designed for customers with long-haul, steady-speed operations, utilizes turbo compounding technology that recovers energy typically wasted through the exhaust, converting it into useable mechanical energy that is transferred back to the engine.

As reported, the additional horsepower is fed directly to the crankshaft, resulting in up to a 6.5% improvement in fuel efficiency from the engine alone when compared with previous GHG14 D13 engine models.

“Turbo Compound is a waste heat recovery system that uses a turbine to convert energy from the exhaust gases into additional torque on the crankshaft, improving engine efficiency,” says John Moore, Volvo Trucks product marketing manager – powertrain. “This robust system is completely mechanical and adds no additional routine maintenance to the engine.”

Volvo says that customers are able to pair the D13TC with Volvo’s XE – eXceptional Efficiency – powertrain packages, which rely on Volvo’s fully integrated I-Shift automated manual transmission to downspeed the engine, enabling a cruise rpm up to 300 rpm less than the average truck sold today.

The automaker says the VNL series comes standard with the Volvo D13 engine, with the D13TC available as an option. Customers choosing Daycab and VNL 400 models also have the option of spec’ing the 11-liter Volvo D11 as an alternative. The 15-liter Cummins X15 is also available in the VNL series.

“Volvo’s proprietary engine options in the new VNL series mean customers no longer have to choose between good fuel efficiency and good power,” says Moore. “These features added to the proven Volvo D-series foundation enable us to give customers the performance they want, along with the efficiency their business requires.”