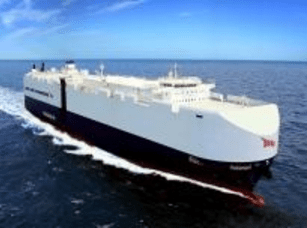 The Volkswagen Group says it will use two liquefied natural gas (LNG)-powered charter vessels for vehicle shipment on routes between Europe and North America.

The automaker says the two vessels from Siem Car Carriers, with a length of about 200 meters and a width of about 36 meters, have a capacity of about 4,500 vehicles. According to Volkswagen, the car carriers will be equipped with a 3,000 m³ LNG tank installed below deck and will, therefore, have a comparable capacity to conventional transatlantic freighters. Both ships will feature a 12,600 kW engine developed by MAN Diesel & Turbo.

Wolfram Thomas, head of group production, notes that Volkswagen is working to improve environmental compatibility across the board, including in production and logistics. The use of LNG-powered roll on/roll off car carriers on other routes is currently being considered.

Thomas Zernechel, head of group logistics, stated, “Compared with other means of transport, marine shipping is one of the most efficient possibilities. Volkswagen Group Logistics already transports half of the vehicles produced by sea. The possibility of changing other vehicle transport vessels chartered by Volkswagen over to LNG operation will depend on the availability of the necessary infrastructure. Apart from LNG as an alternative fuel, we are also working on other projects, which will continuously make our logistics processes more environmentally compatible.”

According to Volkswagen, the two LNG ships will replace two of the nine conventional freighters powered by heavy fuel oil from 2019 onward. As reported, these are used exclusively for the Volkswagen Group in a round-trip scheme across the North Atlantic, serving the markets of Canada, the U.S., Mexico and Europe.

“The use of LNG-powered car carriers not only makes marine transport of this type more environmentally compatible, but will also make the entire operation significantly more efficient in the long term,” added Kenneth Ross, CEO of Siem Car Carriers AS.