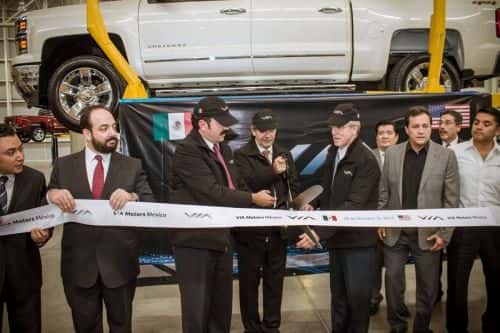 VIA Motors has cut the ribbon on its new facility in San Luis Potosi, Mexico, where VIA's electric vehicles (EVs) will be manufactured on a high-volume assembly line.

New vehicles – including trucks, vans and SUVs – are transported from the General Motors production facility in Silao to VIA's plant in San Luis Potosi, where they are converted into EVs by integrating VIA's proprietary extended-range electric powertrain. The facility uses a conveyor-scissor lift system that moves conventional vehicles through eight assembly stations, where technicians raise/lower the vehicle to install electric and other components.

The new facility is adjacent to the ‘NAFTA highway’ and a Kansas City Southern rail line, enabling the easy transportation of EVs to the U.S. and Canada, VIA notes.