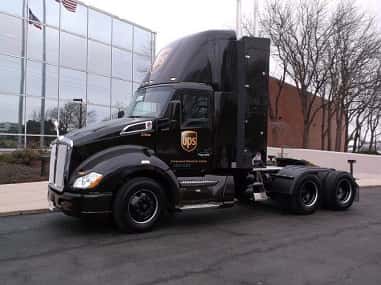 In April, UPS announced huge plans to add about 1,400 more compressed natural gas (CNG) vehicles to its fleet and build 15 new CNG stations across the U.S. As the year comes to a close, the company provides an update on its CNG deployment and offers some insight into the natural gas vehicle market, overall, during a time when diesel prices are so low.

Mike Casteel, director of fleet procurement for UPS in North America, says the company has a long history with CNG.

“We started in the 1980s by deploying a few CNG package cars,” he tells NGT News. “That was a time of energy cost anxiety, and there were some initiatives in place to explore different opportunities.” In 2012 or so, Casteel says UPS ramped up its efforts to create a large CNG fleet.

In the beginning of 2015, the company’s CNG fleet totaled 971 of its familiar, brown package-delivery vehicles (also called package cars), 48 tractors, and 52 yard shifters. This latest round of deployment called for 616 more CNG package cars and 783 additional CNG tractors.

“It’s virtually done,” he states, adding that the company has been deploying the latest vehicles heavily over the past few weeks. Casteel expects UPS to finish the entire deployment within the first quarter of next year.

“In order for us to continue fleet deployment, we have to continue station deployment – one goes hand in hand with the other,” explains Casteel.

He says all but two of the 15 new CNG stations are now operational, and the remaining locations are expected to be online shortly.

Regarding UPS’ relationship with TruStar Energy, Casteel says it has been “absolutely great” and there have been “no issues whatsoever.”

All of the CNG stations are private and located on UPS property. Casteel says there are myriad reasons why UPS builds its own stations – rather than uses public facilities – but it all boils down to having complete control.

“We appreciate the idea that we have full transparency of costs and know how the capital is allocated,” he says. “The main reason we build our own infrastructure is that we need to control our access to the fuel.”

“For us, fueling on the road presents some operational problems: It’s risky not knowing that you’ll have access to fuel at the moment that you need it, and if we take a driver off route for a few minutes, we could start having trouble with turnaround times,” states Casteel, adding, “Our vehicles come home every day.”

A call for innovation
In the face of such low diesel prices lately, UPS remains committed to CNG and other alternative fuels; however, Casteel says cheaper diesel has recently made it somewhat tougher to figure out where and when future CNG deployments are viable.

“The cost gap between diesel and natural gas certainly has tightened,” he states. “In order to keep deploying natural gas, we have to continue to find higher-mile routes in order to generate the fuel savings that we need to justify the increased investment. That’s what we’ve been doing. Those opportunities become more and more difficult to find, though.”

Casteel says UPS’ main CNG focus is on its tractors, as the heavy-duty trucks log more miles and, thus, use more fuel.

“The package cars only travel less than 100 miles a day, with the average somewhere about 70 or 75 miles a day,” he explains. He notes UPS does deploy some of its CNG package cars on higher-than-average-mile routes, and the company has also taken advantage of state programs to help subsidize the incremental cost of the vehicles.

Casteel admits that cheaper diesel has made UPS re-evaluate some CNG projects: “Our project list would have been greater had the price gap between diesel and CNG been wider, but we’re still able to find projects that work,” he says.

“You can’t control diesel and gas prices, but coming up with even better technology can absolutely make CNG more attractive,” he says. “Everyone has a stake in working toward a better tomorrow.”

“The more improvements we make, the more costs can come down, and the better able our fleet and others will be able to continue the momentum that’s been started,” he says. “Any improvement in any one area improves our business case and, in theory, allows us to expand our deployment.”

Driving forward
So, why stick with CNG? Casteel suggests the answer is simple: CNG has some big advantages over diesel.

“The obvious benefit is the fuel cost savings,” he says. “There’s still a cost advantage, although diesel and gas prices have gone down.” According to Casteel, “There remain some areas around the country where we’re able to find close to a dollar-a-gallon differential, on average.”

“These are long-term projects and long-term investments, so we know energy costs will increase over all forms in the future,” he explains. “When that happens, though, diesel prices are more affected by the increases in the cost of oil than CNG is affected by the rise in natural gas costs. The gap widens.”

Other benefits, he says, are fuel diversity and the environmental attributes of CNG. Regarding the latter, Casteel notes UPS is looking to invest in renewable natural gas (RNG) in the future, as it is “one of the most environmentally friendly fuels that exist.”

“By building this infrastructure and putting this fleet in place, we’re also creating an end user for more renewable natural gas as it comes online,” he says. In fact, UPS announced just last week that it is using RNG to fuel two of its natural gas fleets.

Looking into 2016 and 2017, Casteel confirms that UPS does, indeed, have plans for even more CNG efforts. Although the company is not ready to release details yet, he says, “I can only tell you we are going to continue deployment.”