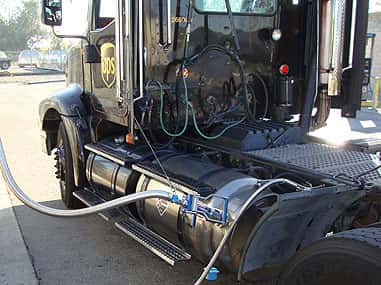 UPS is growing its agreement with Clean Energy Fuels Corp. to use up to 500,000 gallon equivalents of renewable liquefied natural gas (RLNG) annually in Texas. UPS stations in Houston and Mesquite will dispense the RLNG to a fleet of about 140 UPS tractors.

Why is UPS pursuing liquefied natural gas (LNG) in Texas? “It was a combination of convenience and efficiency for both Clean Energy and UPS,” UPS sustainability Public Relations Manager Kristen A. Petrella tells NGTNews. “ It was a simple matter to have Clean Energy direct their Redeem program through their Willis, Texas, LNG plant, making it available for our LNG fleet in Texas.”

Redeem by Clean Energy is a renewable natural gas (RNG) program that sources renewable natural gas (RNG), also known as biomethane, using a variety of methods. It can be used as CNG or LNG and is derived from many abundant and renewable sources, such as decomposing organic waste in landfills, wastewater treatment and agriculture. Clean Energy Fuels more than doubled sales of Redeem in 2015.

The deal is part of a UPS initiative to significantly expand its use of RNG in the company’s alternative fuel and advanced technology fleet. In addition to natural gas, UPS also uses many other alternative fuels, including propane, ethanol, renewable diesel and electricity. In 2014, using these alternative fuels displaced 5.4% of total gas and diesel purchased.