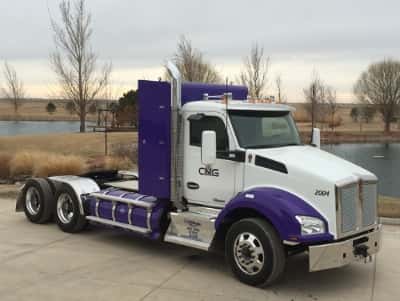 TruStar Energy has been awarded the contract to design and build a public-access compressed natural gas (CNG) station in Liberal, Kan., for CNG Energy LLC.

CNG Energy Vice President Rocky Ormiston, who has been associated with CNG fuel for several years, looked to CNG to power the company's new 12 Kenworth tractors, all of which are scheduled to haul ethanol co-products from the local ethanol plant as well as corn and sorghum into the plant.

‘It all started with our family farm. We have been using CNG to power our irrigation engines for 20 years,’ explains Ormiston, adding that the advent of the 12-liter Cummins Westport engine made the decision to move to CNG-powered tractors relatively easy.

‘Two things that we immediately appreciated with natural gas were the cost per MCF and its price stability over time,’ adds Ormiston. ‘You can do a lot of projections as far as budgeting is concerned without the threat of price spikes. We're also using a domestic fuel source instead of something coming in on a tanker from overseas.’

The CNG Energy station will feature two public fast-fill dispensers with volume that will support not only the company's own 12 tractors, but also other commercial fleets and private vehicles in Liberal and the surrounding southwest Kansas area and Oklahoma Panhandle.

‘Our first thought was to develop a private station to support our transport operation,’ says Ormiston, ‘but we realized that other fleets would just go somewhere else – when we had the capacity to provide fuel to them. We felt that it was important to provide the public with a place to fuel as well.’

Scott Edelbach, vice president of TruStar Energy, comments, ‘We're very excited to have partnered with CNG Energy to design and build this station. This is a win-win situation for CNG Energy – as the fuel is being used to support one of their core businesses, as well as provide needed fuel to other fleets in the area.’

Ormiston says the station is scheduled to be online in late June.