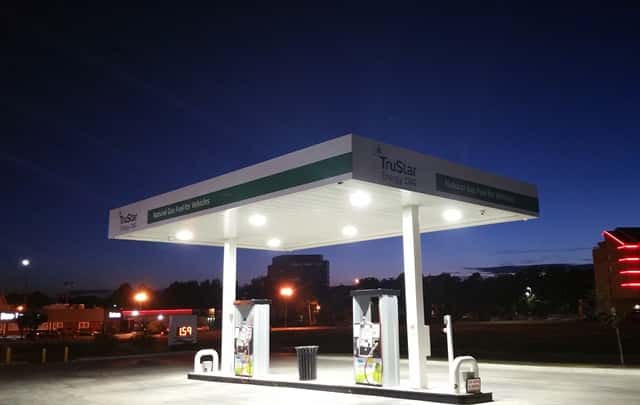 TruStar Energy has announced that the company completed 41 compressed natural gas (CNG) stations for public and private use in 2015, almost doubling the number of CNG stations from 2014 and bringing total completed stations by TruStar Energy to 120. This was accomplished despite a period of unusually low oil prices.

TruStar Energy says that the demand for public and private CNG-fueling stations by fleet owners and operators across the U.S. is continuing to increase because the lower carbon fuel delivers more stable pricing, is a cleaner fuel than diesel and can still provide an attractive return on investment for certain applications.

“Despite the low price of oil, the transition to CNG still makes environmental and financial sense for many fleet owners,” says Adam Comora, president of TruStar Energy. “We are seeing strong demand for CNG-fueled vehicles and fueling stations in the refuse industry because of the financial benefits and by municipalities where sustainability is of paramount importance. With the right application, larger corporations that operate their own fleets are beginning to shift to CNG because the economics can still be supported and the abundant, domestically produced fuel shields them from the volatility of diesel prices.”

“With decades of experience in trucking and fueling, the company’s professionals are experts at designing and building CNG fueling stations that are ready on time, on budget and are swiftly profitable for their owners,” says Scott Edelbach, general manager of TruStar Energy.

For 2016, TruStar Energy sees another strong year of construction revenue growth, expansion of TruStar Energy branded public locations and the continued rollout of a TruStar Energy national service platform. TruStar Energy says it will be approaching 80 million gasoline gallon equivalent under long-term service agreements by the end of this year.