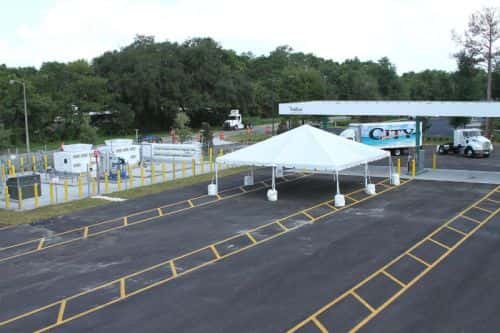 TruStar Energy, which has long worked with other companies and government customers as a compressed natural gas (CNG) fueling station developer, constructor and service provider, has revealed a new initiative and opened its first and very own TruStar-Energy-branded CNG station.

‘We continue to see a shift taking place in North America where more commercial vehicles are running on CNG – it's cheaper, cleaner, quieter running, and domestically abundant and produced. As a result, the company has embarked on a strategic path to open dozens of TruStar Energy public CNG stations [in the U.S.] over the next several years – Orlando is our first,’ explains TruStar Energy President Adam Comora.

‘Rest assured, though, we will continue to provide the same outstanding design, construction, maintenance, and training services for private, public and government customers,” adds Comora.

For example, Jose Rivera, vice president at Florida-based J.J. Taylor, says TruStar served as a valuable partner in the construction of the beer distributor's Tampa and Ft. Myers CNG stations.

“[TruStar's] investment in growing Florida's CNG fueling infrastructure will provide fleets – like ours – the ability to extend our routes outside of our private station network – they should be applauded for undertaking this initiative,” comments Rivera.

‘We identified Orlando as one of the best markets to build our first station, because it has a high volume of CNG vehicles and the potential to add many more,’ remarks Scott Edelbach, general manager of TruStar Energy. ‘Our state-of-the-art CNG station is perfectly located close to several major fleets, as well as a heavy traffic corridor, making it a valuable, profitable and productive resource for businesses in the area.’

The TruStar Energy CNG station is supplied by TECO Peoples Gas, a natural gas distribution utility that also recently tapped TruStar to construct a separate CNG station for the City of Orlando.

‘By using domestically produced natural gas to fuel our transportation needs, we are not only creating and securing more American jobs, but also decreasing our dependence on foreign oil,’ comments Keith Gruetzmacher, senior manager of alternative fuel vehicle programs for TECO Peoples Gas. ‘TECO Peoples Gas is proud to partner with TruStar Energy to accelerate this clean, efficient and American fueling solution.’

Swertfeger adds TruStar will be building another company-branded CNG station in Florida's Ft. Myers region – just another station in what TruStar expects will eventually become the company's growing public CNG network across the U.S.