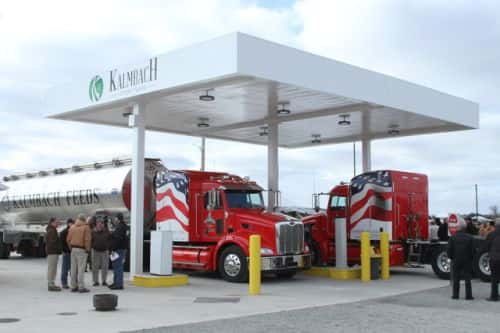 The station – which is located at 11790 County Highway, 4 close to U.S. routes 30 and 23 – was built primarily to support Kalmbach's own growing fleet of CNG-powered trucks. Kalmbach intends to transition its entire fleet to either dedicated CNG or bi-fuel CNG vehicles within five years. To that end, the company has trained and certified its technicians to work on NGVs, and it is also investing in a new maintenance facility designed to service CNG vehicles.

‘The food distribution market segment is becoming increasingly more aggressive in their migration to CNG fuel – and the Kalmbach Feeds station represents an important part of the growing infrastructure,’ says TruStar Energy Vice President Scott Edelbach. ‘Fleet owners in the area now have added incentive to look at migrating their own fleets, thanks to Kalmbach's vision.’