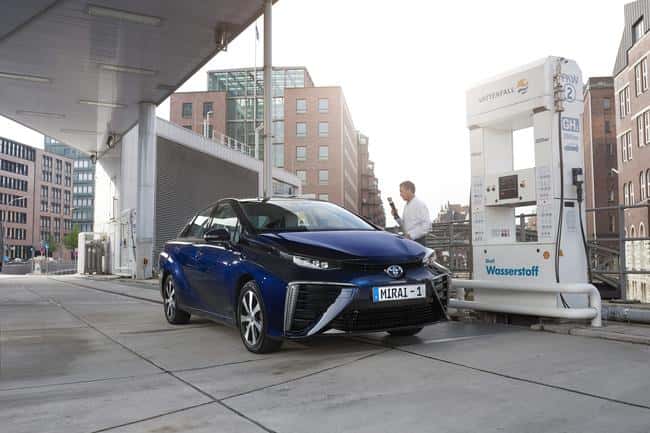 The Toyota Mirai hydrogen fuel cell vehicle (FCV) has successfully completed its 100,000 kilometer European road test over the course of 107 days. Every day for 107 days, the Mirai was on the road for 16 hours, and during its 100,000 kilometer journey, the car was refueled nearly 400 times with just over 1,000 kg of hydrogen. It also had its tires changed twice and its front brake pads replaced, but no mechanical breakdowns were reported.

The road test was handled by KJ Tech Services GmbH of Hamburg, Germany, though Toyota specified the total distance the Mirai should cover, as well as the amount of time spent on different types of road: in the city, on rural roads, on motorways and on German autobahns with no speed limit.

To meet these specifications, KJ Tech Services carefully calculated a single route in and around Hamburg and organized a team of eight drivers to work in two shifts per day, six days a week. Toyota also asked the eight drivers for their feedback on the Mirai driving experience.

The demonstration seeks to showcase how the Mirai and other FCVs are able to quickly refuel compared with electric vehicles. Toyota touts a three-minute refuel time for the Mirai, while many EVs require at least 20 minutes for an 80% recharge from a Level 3 DC fast charger or several hours from a Level 2 charger.

However, a lack of hydrogen fueling stations means that the Toyota Mirai is only available in a handful of places, such as Southern California, and only in extremely limited numbers. The Japanese government recently announced an initiative to expand hydrogen-fueling options around the island nation and put approximately 40,000 FCVs on its roads by 2020.