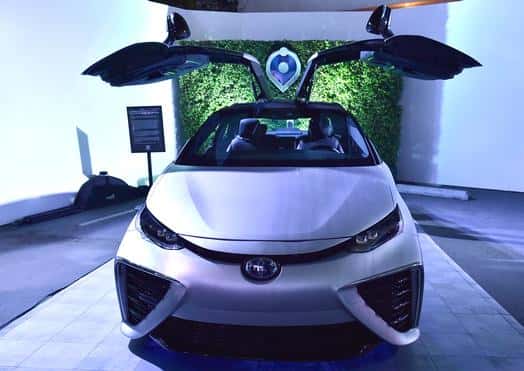 In case you haven’t heard, today has been designated “Back to the Future Day” by the internet, the media – even the White House. That’s because Oct. 21, 2015, is the date character Marty McFly traveled forward to in the franchise’s second movie.

Well, Toyota has used the occasion to help mark the U.S. arrival of its new Mirai hydrogen fuel cell vehicle, which the manufacturer calls “a modern, real-life version of Doc Brown’s trash-fueled technology.”

On Tuesday night in West Hollywood, Calif., more than 300 new Toyota Mirai owners, Mirai dealers and special guests watched actors Michael J. Fox and Christopher Lloyd bring the trash-into-fuel scene from “Back to the Future Part II” into the present. Toyota says the “Fueled by the Future” video debuted at the event is the last in the “Fueled By Everything” online video series demonstrating hydrogen fuel’s potential to be sourced from almost anything, including solar, wind and trash.

Oct. 21 marks the official on-sale date of the Mirai, the same date that was “the future” in the 1989 film. According to Toyota, more than 2,000 people so far have requested to buy a Mirai in California, where the vehicle is first available in the U.S. New owners representing each of the dealership locations in Southern and Northern California received ceremonial keys during the Tuesday event, and Toyota says they will be behind the wheel soon.

“This moment celebrated the intersection between the U.S. arrival of the Mirai and the 30th anniversary of an iconic film,” said Bill Fay, Toyota division group vice president and general manager, at the event. “We were thrilled to mark the occasion with a video featuring the film’s original stars Michael J. Fox and Christopher Lloyd, reminding our first Mirai owners that they will be driving a future we could only dream of 30 years ago.”

Although drivers can’t exactly throw soda cans and banana peels into the Mirai fuel tank and expect to cruise the roads of California, Toyota says, organic waste can decompose and produce biogas at landfills. This gas can be purified into and converted into hydrogen for fuel. The only emission from the Mirai’s tailpipe is water, adds Toyota.

Also on hand at the event were two exclusive “Back to the Future”-inspired vehicles. The first re-imagined Doc Brown’s time machine as a customized Mirai, complete with gullwing doors and a heads-up display of the time-traveling destination. (Please note: Toyota does not offer the real Marai with such doors or a flux capacitor as yet.) The second was a re-creation of Marty McFly’s “dream truck” using the all-new 2016 Toyota Tacoma, which went on sale in September.

Cover photo by Jordan Strauss/Invision for Toyota/AP Images: Toyota displayed a customized Mirai “time machine” at the launch of the manufacturer’s new fuel cell vehicles at Quixote Studios on Oct. 20, 2015.