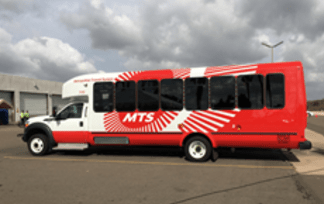 The San Diego Metropolitan Transit System (MTS) has rolled out its new fleet of 77 buses fueled by propane autogas, helping the agency reduce its operating costs and reducing emissions by 2 million pounds per year.

“This is a great example of how MTS is realizing cost savings and helping communities reduce emissions,” says MTS CEO Paul Jablonski. “MTS will save about $5.8 million over the five- to seven-year lifecycle of the vehicles and reduce the carbon intensity by 71 percent.”

According to the agency, the MTS purchased 31 minibuses and 46 paratransit buses fueled by propane. All propane-fueled buses will be stationed at the agency’s Copley Park Division in Kearny Mesa, where MTS operates 178 paratransit vehicles and 37 minibuses.

With the switch to propane, 35% of the Copley Park fleet is now operating on alternative fuels.

The MTS says that over the lifetime of the fleet, more than 7.8 million pounds of carbon dioxide will be eliminated from its total carbon footprint – the equivalent of taking 747 passenger vehicles off the road for a year, according to the U.S. Environmental Protection Agency’s (EPA) equivalencies calculator.

Historically, propane autogas costs 40% less than gasoline and up to 50% less than diesel. The current gasoline price the MTS pays is $1.99 per gallon, and the propane price is $1.39 per gallon.

The alt-fuel tech provider has deployed nearly 14,000 propane autogas vehicles to fleets across America – of those, approximately 800 operate in the transit industry.