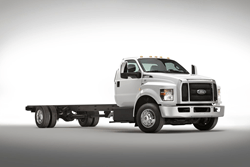 In an effort to meet growing demand for alternative-fuel-powered, medium-duty trucks, ROUSH CleanTech has developed a propane autogas fuel system for the Ford F-750 chassis that costs less than similar diesel counterparts. Operating up to 33,000 GVWR, the model was created as an autogas-fueled, medium-duty chassis for bobtail applications, cylinder delivery trucks, larger tank setters and box trucks.

The Ford F-750 base model comes with a 50-usable-gallon fuel tank located on the driver side of the truck. An extended tank option is available for those in need of even more mileage.

Michigan propane supplier Victory Propane was one of the first in line to purchase the new Ford F-750, says ROUSH. “Victory Propane already has 25 Ford F-650s equipped with the ROUSH CleanTech fuel system,” says Gregg Falberg, president of Victory Propane. “We will increase our autogas fleet with ROUSH’s first two Ford F-750s, and 13 more have been ordered.”

According to ROUSH, propane autogas historically costs up to 40% less than gasoline and 50% less than diesel. Each Ford F-750 equipped with this fuel system will emit about 120,000 fewer pounds of carbon dioxide over its lifetime compared with conventionally fueled counterparts.

The first production propane-powered Ford F-750 with a 3,200-gallon barrel will be on display during the NPGA Southeastern Convention & International Propane Expo held in Nashville, Tenn., from April 8-10.