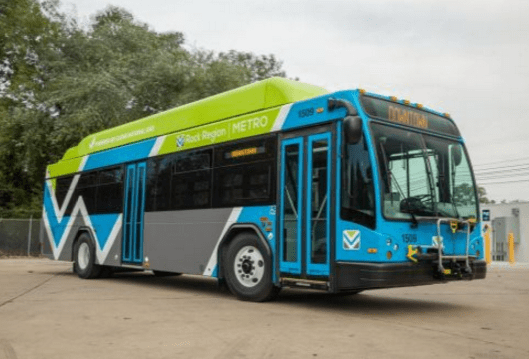 Rock Region Metro in Arkansas says it was awarded $1.65 million in Federal Transit Administration (FTA) funds to put toward the purchase of seven compressed natural gas (CNG) buses and an educational diagnostic center for agency mechanics.

According to the central Arkansas public transit system, which serves 3 million passengers per year in the cities of Little Rock, North Little Rock, Maumelle, Jacksonville, Sherwood and Pulaski County, this is the first FTA competitive grant for bus and bus facilities it has ever received.

“This award will greatly assist us in bringing modern transit to central Arkansas,” said Jarod Varner, executive director for Rock Region Metro. “With careful financial planning from our board and staff and the help of these funds, we continue to make progress on our fleet replacement plan to transition all diesel-fueled Metro buses with compressed natural gas buses by the end of 2025 and maintaining bus size diversity.”

Metro notes that 61 projects were funded through the 2016 FTA bus and bus facilities grant program, with 284 applications received.

“Grant funding such as this, made available through the Fixing America’s Surface Transportation Act, is critical to improving long-term planning and project finance for public transit infrastructure across our country. Metro continues to pursue a dedicated funding source for central Arkansas public transit service so we may have the matching fund reserves to compete for even more federal transportation funding,” said Varner.