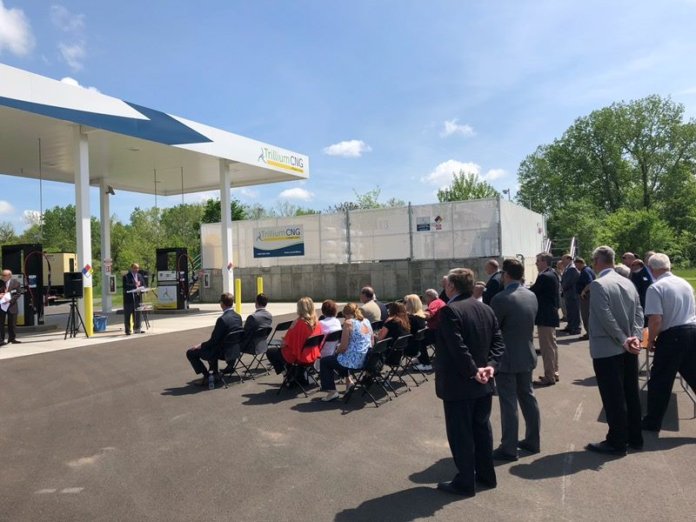 The facility is the third of six new public-access CNG fueling stations Trillium is designing, building and maintaining for numerous transit authorities in Pennsylvania as part of a public-private partnership (P-3) contract PennDOT awarded the company in 2016. Through the $84.5 million statewide P3 project, Trillium is adding public and private CNG fueling stations at 29 public transit agency sites in Pennsylvania.

The new station, located at 311 Mahoning Ave. in New Castle, is open 24/7 and features three CNG dispensers. It will primarily serve NCTA’s fleet of CNG buses, but it’s also open to the public, including for light-, medium- and heavy-duty vehicles.

“The New Castle Transit Authority is thrilled to be part of the P-3 program that will provide our authority and the public with access to a more cost-effective and cleaner-burning fuel,” says David Richards, general manager for NCTA.

During the station’s ribbon-cutting, officials demonstrated the ease of fueling with a truck provided by Columbia Gas. State Sen. Elder Vogel and State Rep. Chris Sainato also attended the event.

“It’s been two years since Trillium and PennDOT entered the agreement to bring more CNG stations to transit authorities and drivers in Pennsylvania, and it’s great to see the hard work paying off,” Carson Hoyt, general manager of design-build services for Trillium, said at the ribbon-cutting. “Together, we’re offering a clean fuel derived from an abundant local resource, and we’re giving consumers another option. It’s a real win-win for Pennsylvania.”

Larson Design Group of Williamsport, Pa., is assisting with the construction of the locations. The next public facility, located at Indiana County Transit Authority, is scheduled to open this fall. Additional public facilities are scheduled to open at transit authorities across Pennsylvania in Lackawanna and Erie counties in later phases of the project.