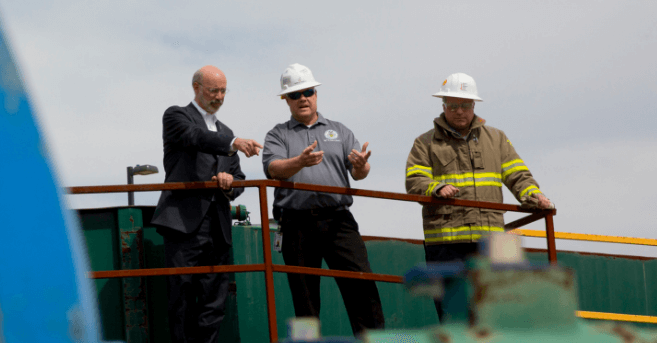 Pennsylvania Gov. Tom Wolf has announced the opening of the first of 29 compressed natural gas (CNG) fueling stations planned as part of a public-private partnership.

“This innovative P3 is allowing us to help transit agencies save money and take advantage of plentiful supplies of natural gas produced right here in Pennsylvania,” says Wolf. “We applaud Trillium for reaching this first milestone and look forward to continued progress on this initiative.”

Through the $84.5 million statewide project, Trillium will design, build, finance, operate and maintain CNG fueling stations at 29 public transit agency sites through a 20-year P3 agreement. After the opening of this first station, the rest will be constructed over the next five years, and Trillium will make CNG-related upgrades to existing transit maintenance facilities.

According to the governor’s release, CNG fueling will be accessible to the public at six transit agency sites, with the option to add to additional sites in the future.

As reported, PennDOT will receive a 15% royalty, excluding taxes, for each gallon of fuel sold to the public, which will be used to support the cost of the project. The team has guaranteed at least $2.1 million in royalties over the term of the agreement.