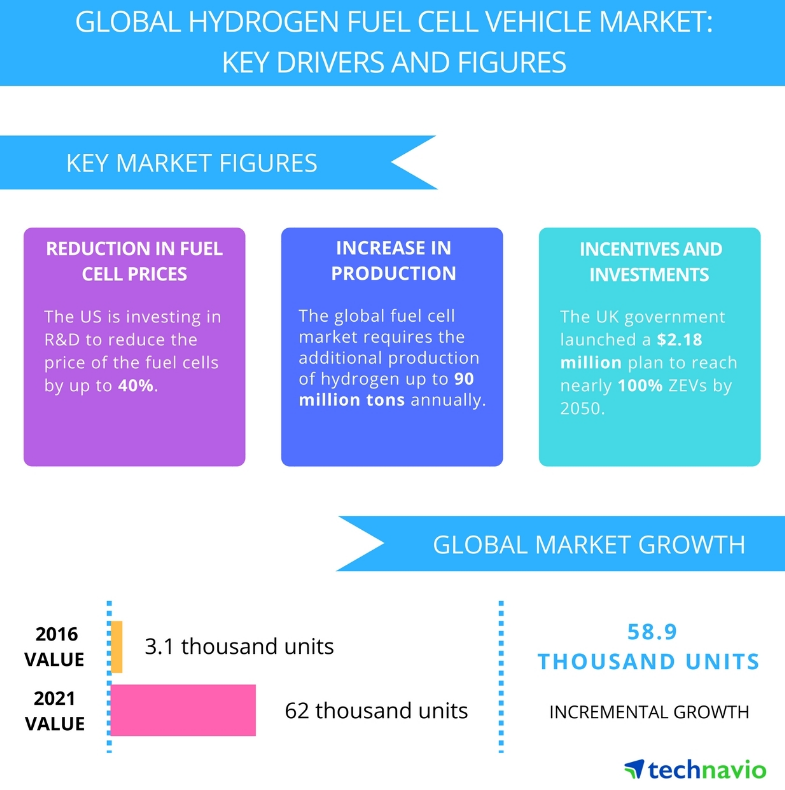 The global hydrogen fuel cell vehicle (HFCV) market is expected to grow at a staggering compound annual growth rate of more than 82% during the forecast period, according to the latest Technavio report.

The market study covers the present scenario and growth prospects of the global HFCV market for 2017-2021, examining emerging trends and their influence on the market. The report also presents the vendor landscape and a detailed analysis of the four prominent vendors operating in the market.

Technavio’s automotive analysts highlight the following three market drivers that are contributing to the growth of the global HFCV market:

According to Siddharth Jaiswal, a lead analyst at Technavio for automotive manufacturing research, “Fuel cell technology reduces dependency on conventional energy resources and diversifies renewable energy sources. Further, HFCVs allow efficient operation with fewer vibrations and lower levels of noise pollution. A recent study from the National Research Council has revealed that GHG emissions from vehicles have declined owing to the use of HEVs and HFCVs.”

The long-term economic benefit of HFCVs is another driver that is shifting focus toward fuel cell technology. Further, FCs are compact and lightweight, thereby the mileage of these vehicles is considerably higher when compared to plug-in electric vehicles.

As reported, significant investments are being made to scale up the production of hydrogen and develop clean and emission-free hydrogen production technologies, including thermochemical conversion of fossil fuels to hydrogen by steam methane reforming or coal gasification processes with integrated carbon capture and storage units, biomass gasification, and the use of nuclear or renewable energy for water electrolysis.

Currently, most HFCVs in use are being adopted because of the strong push and support from government authorities. Governments of large hydrogen vehicles markets such as Japan, the U.S. and Europe have come up with incentives and subsidies for private ownership and direct investments for the parallel development of hydrogen infrastructure. For instance, starting from 2014, the government of Japan has been offering tax rebates of more than U.S. $19,000 per HFCV purchase.