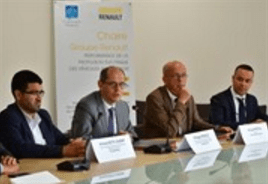 Ecole Centrale Nantes and car manufacturer Renault say they have partnered together to launch the first Research Chair dedicated to the propulsion performance of electric vehicles (EVs).

“This chair will be tasked with putting advanced propulsion system technologies in place in order to explore new avenues to optimize the performance, robustness, safety and costs of electric and hybrid engines,” explained Philippe Schulz, director of design for electric and hybrid powertrains at Renault Groupe.

In the first half of 2016, 50,000 new electric cars were registered in Europe – an increase of 11% compared with 2015. France is the largest market, followed by Norway, where EVs have a 13% share of the market. In this context of growth of EVs, manufacturers are speeding up the development of their zero-emissions vehicles.

“The decision to combine the resources of Renault and Centrale Nantes will prove decisive in the rise of electric vehicles in France. This new chair will benefit from the excellence of Centrale Nantes, combined with the expertise of Renault,” added Arnaud Poitou, director of the Ecole Centrale Nantes.

In addition to the research work, two new training programs are also available: 1) initial training courses for engineering students at Centrale Nantes or international master’s students, dedicated to electrical energy and its generation, management and storage; and 2) continuing training for employees of Renault Groupe specific to the control and observation of electric energy.

According to the companies, the start-up will be located on the campus during the five years that the chair will operate. About 30 international researchers, engineers, professors, Ph.D. students, post-doctoral and master’s students associated with teams at Renault will work on three scientific areas: robust control of electric drive motors; control and management of onboard charging systems; and optimizing the potential energy of hybrid engine systems.

With a budget of EUR 4.6 million over five years, this new chair of electric propulsion performance is led by Malek Ghanes, university professor at Centrale Nantes.