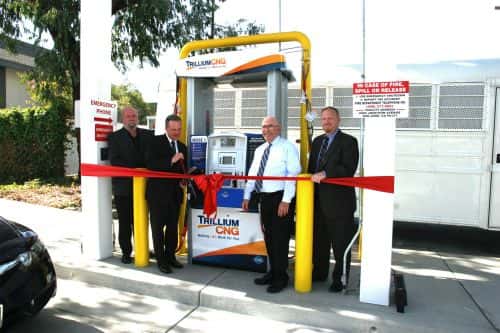 The County of Santa Clara, Calif., has cut the ribbon for its new compressed natural gas (CNG) fueling station at its Fleet Division center in San Jose. The project is a public-private partnership between the county and developer Trillium CNG, with offset funding from the California Energy Commission (CEC).

‘The county is a leader in environmental stewardship with a long record of investments that encourage environmental conservation,’ says Dave Cortese, president of the county's board of supervisors. ‘[The] opening of this compressed natural gas fueling station represents a chance to not only deploy alternative fuel vehicles for the bounty fleet, but also to make it easier for the public to choose environmentally friendly vehicles to reduce greenhouse gas emissions within this critical transportation corridor.”
Â
The county says it has entered into a concessionaire agreement with Trillium CNG for the management and operation of the fueling station, including fuel prices and collecting station revenues. In exchange, Trillium will compensate the county a flat fee of $3,000 per month for the term of the contract, plus $0.25/GGE of CNG dispensed.Â

Although total revenue will depend on the amount of CNG dispensed, the county estimates the revenue from concession payments would total $87,000 per year. Additionally, the county says this CNG station will help the county to achieve at least 25% of its fleet as alternative fuel vehicles, saving at least $1.25/GGE. The county expects to save a minimum of $7,500 per year in fuel costs within the first year of operation.
Â
The county fleet includes heavy-, medium- and light-duty vehicles. Initially, the CNG buses operated by the sheriff's office to transport inmates will be serviced at the fueling station. In the year ahead, the county will be adding CNG vans

County Executive Jeffrey V. Smith, who drives a CNG vehicle, comments, “One of the important roles we play as a county is to help demonstrate the market viability for environmentally sound products.”

The county also has a 10-year operations and maintenance agreement with Trillium CNG and two five-year options to extend that contract.

“It's great we can partner with the County of Santa Clara, who clearly understands the benefit of natural gas as a transportation fuel for fleet vehicles,” says Joel Jansen, vice president of Trillium CNG.

The county says the total project cost is $1,512,800, partially offset by a $300,000 reimbursement from a CEC grant under the agency's Alternative and Renewable Fuel and Vehicle Transportation Program (ARFVTP).
Â
“The Energy Commission is excited to see this CNG station open in San Jose and provide a less-polluting, alternative fuel to gasoline for first responder vehicles such as Santa Clara County Sheriff's buses,” says Jim McKinney, manager of the CEC's ARFVTP. “The commission views CNG as an economical, near-term alternative to petroleum while more advanced alternative fuels and vehicles are developed.”
Â
The new CNG station, located at 2265 Junction Ave., San Jose, near Interstate 880 and Highway 101 and the San Jose Airport, will be open 24/7. It has two dual-hose dispensers, allowing two CNG vehicles to fuel at the same time, and features Trillium CNG's proprietary fast-fill hydraulic intensifier compressor.

Photo courtesy of the County of Santa Clara