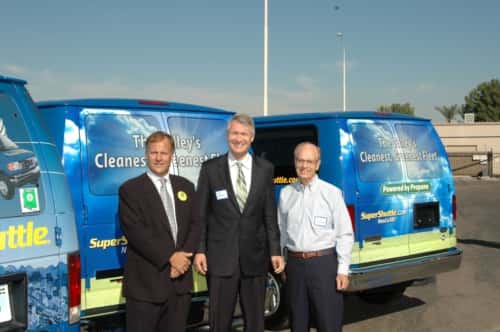 ‘Sharing rides is considered environmentally friendly, because combining rides reduces our carbon footprint and reduces the congestion on our roadways,’ says Dave Bird, executive vice president of operations for SuperShuttle International. ‘It makes sense to step up our game with alternative fuels like propane, particularly in markets where air pollution is a major concern, such as Phoenix.’

SuperShuttle began adding propane-powered vehicles to its fleet in 2009. The company works with ROUSH CleanTech on vehicle conversions, and Ferrellgas has been assisting SuperShuttle with refueling infrastructure and propane supply.

SuperShuttle franchisees that are using propane shuttles in their fleets save an average of $10,000 annually on fuel costs per vehicle, the company says. Drivers refuel at SuperShuttle's on-site propane autogas stations.