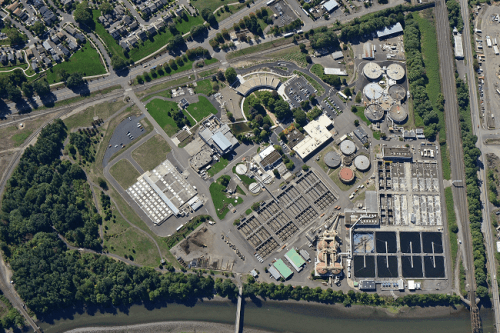 The City of Portland, Ore., has plans to build a facility that converts biogas into compressed natural gas (CNG) vehicle fuel at the existing Columbia Boulevard Wastewater Treatment Plant (CBWTP).

According to the city's Bureau of Environmental Services, the project would help enable the plant to reuse nearly all of the 600 million cubic feet of biogas, a sewage byproduct, it produces annually.

The bureau says it is exploring several possible uses for the CNG, including fueling city-owned vehicles and selling it to Portland-area garbage haulers to fuel trucks or to a utility company.

Linc Mann, a spokesperson for the Bureau of Environmental Services, notes that the municipality and trucking companies have shown interest in converting to CNG.

The project would cost an estimated $10.9 million to design and construct the biogas processing and storage facility and an on-site CNG fueling station at the CBWTP. The bureau says it is exploring available grants and financial incentives to help reduce project costs.

Mann says the goal is to have the project pay for itself within eight or nine years.

“We believe this fuel is marketable and it's a commodity that we can sell and use to offset the cost of operating our treatment plant,” he notes.
Â
The Portland City Council has approved a contract for final design of the facility. Construction could start early next year, and the facility could be operational by 2017.

The Bureau of Environmental Services says the CBWTP has been moving toward 100% biogas reuse for years. More than 30 years ago, Malarkey Roofing Products began purchasing biogas to power part of its manufacturing facility, and the company currently purchases about 20% of the CBWTP's biogas. The CBWTP uses another 20% to fuel boilers that produce heat for buildings and the solids treatment process.

In 2009, the CBWTP installed two 850 kW engine-generators that use about 40% of the plant's biogas as fuel to generate electricity for the wastewater treatment process. Converting biogas to vehicle fuel will reuse practically all the biogas the treatment plant produces.

“Biogas is a sustainable, renewable energy source,” says Portland City Commissioner Nick Fish. “This project will reduce our reliance on fossil fuels, reduce greenhouse gas emissions and save money for our sewer ratepayers.”

Photo: An aerial shot of the Columbia Boulevard Wastewater Treatment Plant, courtesy of the City of Portland.