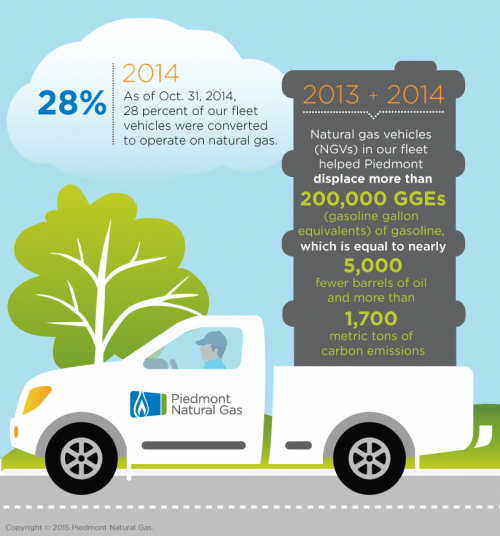 As part of its 2015 Sustainability Report, Piedmont Natural Gas, an energy company that focuses on natural gas distribution in North Carolina, South Carolina and Tennessee, has provided an update on its fleet conversion to compressed natural gas (CNG).

The company says the report offers a comprehensive look at Piedmont's various efforts to integrate environmental, social and economic sustainability into all aspects of its business operations.

According to the report, Piedmont is close to reaching a goal it set two years ago to have 30% of its fleet vehicles run on CNG. As of Oct. 31, 2014, the company has converted about 300 vehicles, or 28% of its fleet, to natural gas.

Piedmont says in the report that it is also helping commercial and private vehicle owners go green with its network of public CNG fueling stations, including its 10th station scheduled to open in September in Anderson, S.C.