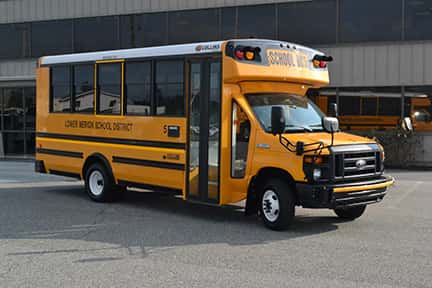 Collins Bus Corp., a subsidiary of motor vehicle manufacturer Allied Specialty Vehicles (ASV), has delivered the first four production units of its new NEXBUS compressed natural gas (CNG) Type A school bus to the Lower Merion School District in Montgomery County, Pa. With more than half of its 117-vehicle fleet fueled by CNG, the Lower Merion School District boasts one of the largest fleets of alternative fuel school buses on the East Coast, according to ASV.

‘Westport's partnership with Collins is a natural one. Each company brings a commitment to offering the best solution for fleet customers and delivering a quality product of superior performance,’ says Paul Shaffer, Westport vice president and managing director responsible for the Westport WiNG business.

According to ASV, NEXBUS is a series of Collins models that feature advanced technologies, such as CNG and other clean alternative fuel systems. Collins has an exclusive agreement to provide the CNG Westport WiNG Power System for Type A school buses built on a Ford chassis.